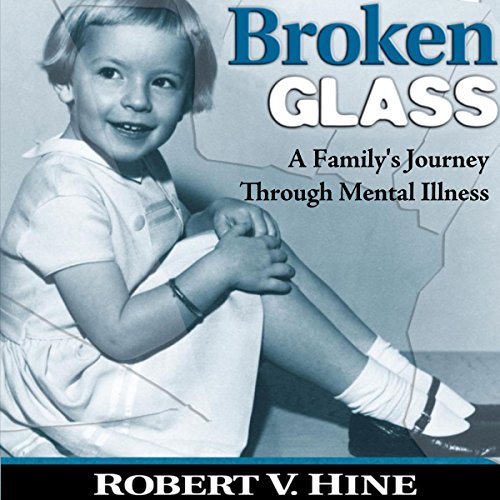 When Robert Hine's daughter, Elene, first showed signs of unhappiness as a little girl, no one dreamed she would grow up to have a serious personality disorder. As an early baby boomer, Elene reached adolescence and young womanhood in the midst of the counterculture years. Her father, a respected professor of American history at the University of California, shares the story of his family's struggle to keep Elene on track and functional, to see her through her troubles with delusions and medication, and eventually to help her raise her own children.

Candid in its portrayal of the suffering Elene and her parents endured and the stumbling efforts of doctors and hospitals, Hine's story is also generous and inspiring. In spite of unimaginable difficulties, Elene and her father preserved their relationship and survived.

The book is published by University of New Mexico Press.

What listeners say about Broken Glass: A Family's Journey Through Mental Illness

Interesting and very personal story. Well written and Kermit the frog is a good narrator.

I received this audiobook for free.

Broken Glass: A Family's Journey Through Mental Illness tells the story of Robert and Shirley Hine as they raise their daughter Elene. Early in her life, the Hines realize that their daughter doesn't act or behave like other children. Schizophrenic tendencies begin to emerge, as she chooses isolation over interaction and deals with various phobias. The majority of this work details the steps the Hine's take to care for and protect their daughter. Robert V. Hine writes an emotionally compelling and deeply affecting work that paints a clear image of a father's love for his daughter. Gary D. MacFadden expertly conveys that love through his engaging and believable narration.

This book opens with a dinnertime conversation between Robert and Shirley as they discuss the history of mental illnesses that runs through their families. As a result, they decide that they can't risk having children of their own, so they choose to adopt. After the interview and searching process, the Hine's adopt Elene. Elene is a healthy and happy baby. She expresses minor abnormalities as she grows up, like her aversion towards gifts, but she doesn't display the myriad of mentally-ill traits that would come to dominate her life. Eventually those traits do surface in intense phobias, emotional outbursts, anti-social behaviors and erratic compulsions. The Hine's take Elene to various doctors and mental care facilities in the hopes for a cure, but they only manage to help Elene cope with her oftentimes debilitating illness.

Throughout this work, Robert shares his emotional state and his varying reactions to Elene's condition. He demonstrates his love for his daughter and his intense desire to help her overcome her illness. It's clear that a child's illness can take a heavy toll on a parent's emotional and mental well-being, and that toll is vividly displayed here. Fortunately, the work isn't over-dramatized by Gary D. MacFadden's narration. He uses a believable tone and diction to match the mood that Robert conveys. The conversations and interactions never feel forced or out-of-place. He uses clear dictation and he doesn't stumble over words or phrases. He was a great choice for this work.

Broken Glass tells an oftentimes heart-breaking but hope-filled journey. It's the story of a father and mother who would do anything to see their daughter succeed. It's a lesson in over-coming hardships and persevering even when life seems depressingly bleak. This is an emotionally affecting book that's difficult to put down. It's certainly worth reading for anyone interested in mental illness or memoirs.