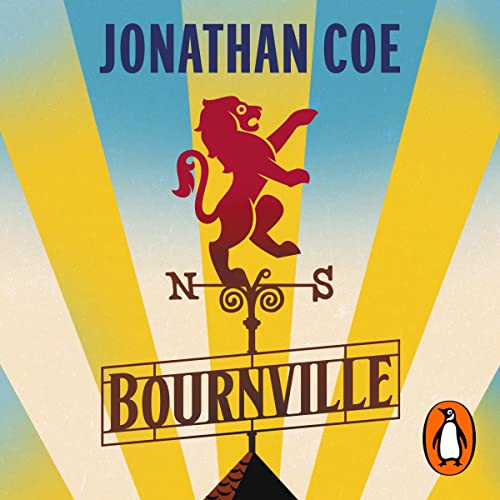 By: Jonathan Coe
Narrated by: Peter Caulfield,Cara Horgan
Try for £0.00

From the bestselling, award-winning author of Middle England comes a profoundly moving, brutally funny and brilliantly true portrait of Britain told through four generations of one family.

In Bournville, a placid suburb of Birmingham, sits a famous chocolate factory. For eleven-year-old Mary and her family in 1945, it's the centre of the world. The reason their streets smell faintly of chocolate, the place where most of their friends and neighbours have worked for decades. Mary will go on to live through the Coronation and the World Cup final, royal weddings and royal funerals, Brexit and Covid-19. She'll have children and grandchildren and great-grandchildren. Parts of the chocolate factory will be transformed into a theme park, as modern life and the city crowd in on their peaceful enclave.

As we travel through seventy-five years of social change, from James Bond to Princess Diana, and from wartime nostalgia to the World Wide Web, one pressing question starts to emerge: will these changing times bring Mary's family - and their country - closer together, or leave them more adrift and divided than ever before?

Bournville is a rich and poignant novel from the bestselling, Costa award-winning author of Middle England. It is the story of a woman, of a nation's love affair with chocolate, of Britain itself.

"A wickedly funny, clever, but also tender and lyrical novel about Britain and Britishness and what we have become." (Rachel Joyce)

What listeners say about Bournville

Such a wasted opportunity

I love Jonathan Coe‘s writing, and I commend him for portraying his mum in such a wonderful light in this book. Unfortunately, outside of Mary and to an extent Bridget, the rest of the characters feel woefully uninspired. The story is meandering and, possibly worst of all, it doesn’t really have anything to say - apart from some hackneyed attempt at circle of life stuff. At times I honestly felt like I was just reading a very boring history of an even more boring family. There is so little depth to the characters and their relation to these historic events. The writer also managed to skip some massive social and cultural shifts. No mention of social media or Trump whatsoever. Which feels a bit pointless, as essentially Boris based his whole schtick on the American president.

I’d give it zero stars if I could

Sentimental and predictable with possibly the worst narrator I’ve heard. Definitely the worst Audible book I’ve had in many years.

I’m a bit fan of Jonathan Coe and enjoyed hearing familiar names from his other novels pop in. The story was enjoyable overall but some sections which would probably have been skimmed through in a paper copy were quite dreary to sit through in this audiobook. The fear of missing a vital piece of information prevented me from skipping on. The biggest let down was the narrator. Mispronounced words throughout were distracting and infuriating, and the one small section narrated by a different person seemed completely unnecessary. Having stuck through it to the end I’m glad I did, but I will be glad not to have to hear the dreary voice of the reader any more!

One of the best books I have ever read. Epically spans eight decades and generations of a family in Birmingham and another fantastic book from Jonathan Coe

If you want to know what makes the English tick, read this!
A tragi-comic tewwtment of four generations of a Birmingham family go through their own upheavals and changes against the backdrops of national events: covid, Brexit, VE day anniversary, death of Diana, coronation of the Queen. Set in the garden suburb of Bournville
Does the English character change since 1945? Well attitudes to race and sexuality certainly. Technology goes forward in leaps and bounds, and the economy evolves.
But in the end, Coe concludes that everything changes, everything stays the same. Lusten to the author's note at the end.
Truly moving with regard to his mother and scathing of the UK government's handling of lockdown and its heartbreaking effect on the elderly. Coe is no fan of Boris Johnson who he weaves into the plot.
Maintains his position as premier state-of-the-nation author working today. A Dickens for our times.
Brilliantly read with authentic Brummy accents! Compliment to the reader(s)!

A good novel, which uses significant events in British history, from World War 2 to the first Covid lockdown, told through their impact on generations of one family. I like the way Coe sees the tiny, often poignant details of how these events impact ordinary lives.

The narrator was okay, but frequently mispronounced words, or got the stress wrong in sentences, which made it harder to get absorbed in the novel. But I’d still recommend this to anyone who enjoyed Coe’s previous novels.

So I’m a 74 year old Brummie, and my school visits to Bourneville were in the ‘50’s, but my goodness, Mr Coe never fails to put his characters into historical context so beautifully that I don’t think I can be biased in my admiration for this excellent book. I hope you enjoy it as much as I did and I hope to read his next novel soon.

Another strong novel about modern Britain