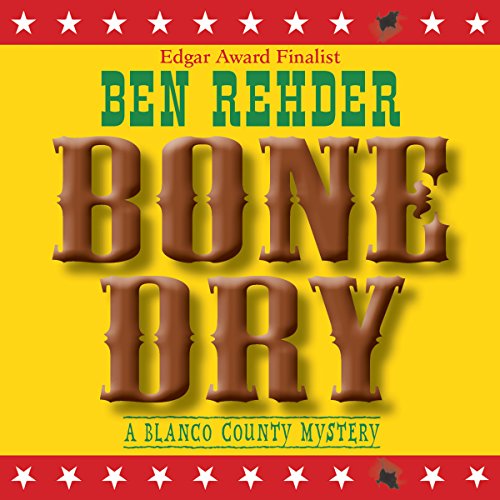 By: Ben Rehder
Narrated by: Jordan Murphy
Try for £0.00

Life can get a little wild from time to time for John Marlin, the game warden in Blanco County, Texas - but few incidents compare to the stories flying around town at the start of this new deer season. Hunters are reporting an incredible sight: A six-foot-tall, drop-dead gorgeous blonde is roaming the woods, searching out camouflage-clad men with guns and disarming them with powers of seduction the likes of which none of them have ever come across before. Everyone has a hearty laugh at the expense of a few embarrassed hunters, until one of their own turns up dead in the woods. Now Marlin has a real mystery to deal with.

Meanwhile, rumors are spreading about a new Blanco resident, an ex-New Yorker named Sal Mameli who's ruffling feathers with his loud mouth and his penchant for getting his own way, no matter what the cost. Before long, John Marlin realizes he may be the only sane man in town, and he's starting to wonder if he can last much longer himself.

It's just the start of another unforgettable hunting season in Bone Dry, the hilarious second novel from Edgar finalist Ben Rehder.

What listeners say about Bone Dry

I totally enjoyed this book!The jokes,the deer,you name it,it is redneck fun. a body is found. There is cockiness from the Menelli clan. Jordan Murphy was a wonderful narrator.I was given this free review copy audiobook at my request and have voluntarily left this review.'

Loved it yet again. Another book and another case to solve by game warden John Marlin. Very good story with great humor to listen to.

Jordan Murphy made this an easy listen.

A very enjoyable thriller, with the right amount of humour , with great characters.

A mystery that has so many pieces it takes a while to solve. This was a fun listen with really good narration.

Narrator could be better.

The narrator did this story an injustice. The plot was carried out very well but the main character could have been developed a little better. Overall I enjoyed the first book.

Format: audiobook
Narrator: Jordan Murphy
The residents of Blanco County sure have character.
I like the way the story unfolds slowly bringing together all the pieces to tie up the case, that’s not to say this is a slow story, in fact it’s pretty fast paced with lots going on, murder, mystery and humour making this a great listen/read.
There’s the regular characters whom I’m beginning to love and a few new characters that bring their own kind of insanity.
Entertaining and enjoyable and the narrator does a pretty good job too.

This is the second book in the Blanco County Mysteries series. Game warden John Marlin is back with more craziness. Loved this book and I'm looking forward to the next book! The narrator is brilliant at bringing the story to life!

(I was given a copy of this audiobook, at my request, for free in exchange for an honest review, good or bad)

Nothing dry about this book

I enjoyed this book. This is book two in the series. You don't need to have listened to book one to enjoy this book because they are stand alone stories but a lot of the characters continue on from the first book so it adds to the fun if you already know the characters and what has gone on before. There is a lot of characters introduced at the start of the book (some you know and some you don't) and you wonder how it is all connected but don't worry all will be revealed as the story unfolds. It is also told by multiple characters but stick with it, it is good. The characters are interesting and it is unusual that the main character is a game warden and not a policeman , although he does get involved in the police investigation. There is no real guessing who the killer is because you know who from the start but it is fun and interesting the way the good guys put everything together to solve the problems and there are quite a few. The book certainly doesn't have time to get boring. Off to start book three.
Deer season is a busy time of year for game warden John Marlen but this year proves to be especially so. A number of reports have come in about a woman sabotaging hunters. It starts with senting a known deer hang out and quickly progresses to taking a gun off a hunter and shooting his truck. All fun and games perpetrated by an eco warrior, until the body of a hunter is found. Just how far would the woman and her boyfriend go to protect some trees and a bird? At the same time the police have there hands full with a missing resident and an overzealous duputy and like the hunting incident that too quickly escalates into something deadly, when the deputy gets taken hostage. Marlen soon finds he is involved in both cases but with his attention divide he loses track of a suspect, who goes out on his own reeking his own justice and destruction. Can Marlen get to the bottom of what's going on in his home town of Bianco or is there more going on than just poaching?
This is a different narrator from the first book but he still does a good job with the characters. I don't normally like it when authors change the narrator as I get use to the first reader but I didn't really notice any change.
I was given this free review copy audiobook at my request and have voluntarily left this review.

Author Ben Rehder casts a humerous eye over the red neck population of Blanco County. Three years before, the unsuspecting area became host to a New Jersey gangster and his family in the witness protection system. Whilst the newly renamed Sal had dreams of escape to a luxurious island life of sun, sand and luscious ladies, teenaged son Vinnie had his own fantasies of gangsterhood and making his dad proud. The area was dry and a prosperous business of brush clearance was underway, giving Sal the idea of how to raise the money he needed to make good on his hopes for that comfortable peaceful life in his latter years. Then a body is found, a suspect arrested, an elderly local businessman goes missing and a couple move into Blanco County with ideas very different from those of the locals.

With a host of characters to be introduced to the reader at the beginning, the start is slow despite the interesting way in which they are presented, but once underway the story is fun, fast moving and the protagonists take on a full life of their own - these people, with all their foibles and eccentricities, fears, schemes and hopes for their futures, become very real, their world lingering in the reader's head long after the book is finished. Narration by Jordan Murphy is also good, with personalized voicing for each of the numerous individuals and a quick delivery throughout.

My thanks to the rights holder of Bone Dry, who, at my request, freely gifted me a complimentary copy, via Audiobook Boom. The second in a longish series, it stands completely alone and, for me, personally, has been a good discovery. I enjoyed the quirky characters, their interactions and environment so different from my own, the way in which the author progressed the story and the murder mysteries themselves. A little bit bloody, a smidgen of sex, all worked together to build a rich picture. This is a series to which I will definitely return.

This book almost lost a star because of a few scenes in the book - one of which was a takeoff of a famous scene from The Godfather. There was a lot going on in Blanco County - hunters being harassed, people getting killed, explosions, sheriff deputy being held hostage, romance - just to name a few at the beginning of this year's deer season, so much in fact that the game warden got pulled into helping the police figure out what's going on. Besides those few scenes I thoroughly enjoyed the book and look forward to listening to another one.

I totally enjoyed this book!The jokes,the deer,you name it,it is redneck fun. a body is found. There is cockiness from the Menelli clan. Jordan Murphy was a wonderful narrator.I was given this free review copy audiobook at my request and have voluntarily left this review.'

I love the story and definitely recommend reading this book and the rest of the series. However, I didn’t like the recording of this book. You can tell when the reader stopped and started recording again because the volume was different. It was really bad at the beginning and very distracting. It got better later in the book.

A mystery that has so many pieces it takes a while to solve. This was a fun listen with really good narration.

Another strong delivery from Rehder combing a solid mystery with humor against a backdrop of small town life in Texas, all while examining important issues facing modern America.

Stands alone, but better as part of the series.

I received this audiobook for free in exchange for a review.

This 2nd book was a Fun Romp!!

If you want a story about Texas, good old boys, dedicated Game Officer & Local Sheriff and one Heck of a story this is the Audible book for you!!
Good storyline interesting characters and a whole bunch of criminal action going on.
Narrator does a good job with this story.

Humor, violence, action, and lust in the dust. I found the Nordic tree hugger irritating, annoying, and a pain in the back most of the time. No connection. I felt empathy for the housekeeper with that vile boss and his toady son. Many interesting and unique characters. I didn't get to read the first book in this series, but I'm enjoying what I have read. I voluntarily listened to a free copy of this and am giving an honest review. The narrator did a great job.

Hilarious. This series is addictive.

This is for fun, not greek tragedy, and it is an awful lot of fun. A million little threads all get pulled together by the end and keep you cackling all the way through.