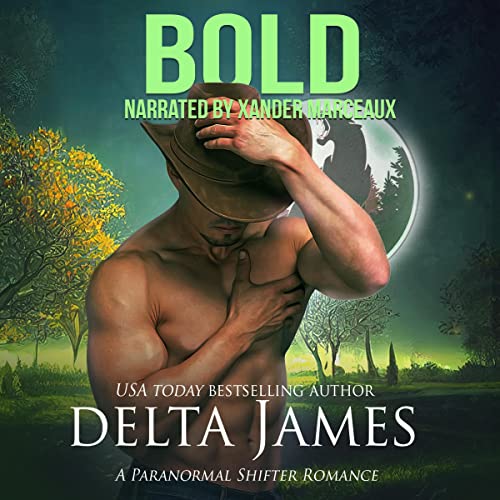 By: Delta James
Narrated by: Xander Marceaux
Try for £0.00

There’s a new Lion in charge.

Everyone thought Cash was the calm, cool, and collected brother. They were wrong.

As the investigation into his father’s death continues, Cash arrives at River Run in Colorado to buy a rare bull. The moment he hears Evie’s voice he knows she is his bonded spirit. He’ll pay her asking price with the addition of one thing...her.

Evie is an Alpha she-cat who is too busy saving her ranch to consider a mate.

During a murder investigation is not the best time to claim a mate.

Is the price too high?

Bold is a steamy fast-paced fated mate paranormal romance and the second book in the Ghost Cat Canyon series. Although the mystery of Cyrus’ murder is continued in the following books, this is a complete story with an HEA. The only remaining question is who killed Cyrus?

Buy Bold today to enter an action packed world where the shifters are not the only ones keeping secrets.

What listeners say about Bold

Let me say that I love this series! I am sorry each book is not longer. Evie and Cash met when she wanted to sell a prized bull, Royal. He realizes she is his bonded spirit. This was a great short story especially when, as her mate, Cash takes over the ranch and he takes total control and has them working together. There were several villains and Cash was able to handle them. There was lots of suspense and we still do not know who killed Cyrus. I cannot wait for the next book. Xander Marceaux did a great job with the narration.

First i have to say I loved this What a wonderful yet different type of story This story was very interesting, intriguing and quite unique. It certainly caught my attention. There's truly wonderful characters that make the story intense and well rounded I'm so looking forward to the next one !!!!

Xander did a fabulous job narrating this sizzling story.