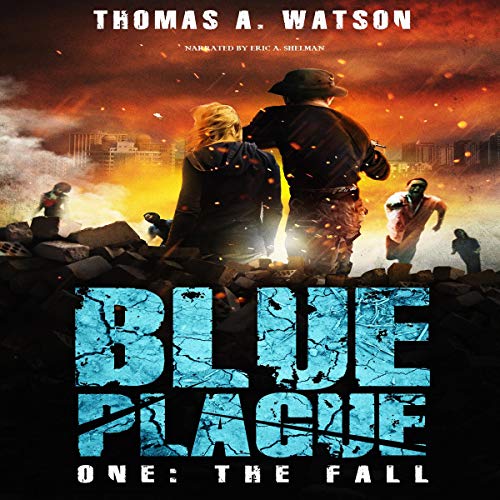 The Preppers were right. And the time is now.

The Blue Plague came roaring out of the Congo and into the United States - and it can’t be stopped. The Infected become violently insane and impossibly strong. They’re not zombies - no, that would be too easy - they’re something much worse.

The Infected are violent and unstoppable, but they can think. They can heal from most wounds. And worst of all - they can reproduce.

Bruce, Debbie, Mike and Nancy have been preparing for the worst for years. There’s nothing to do but bug out - and they know exactly where to go. But on the arduous journey to reach the sanctuary of their farm, they confront thousands of The Infected. Along the way they make some invaluable new friends, and together, the emboldened troop kicks the hell out of the Infected - and the equally dangerous marauders who are willing to murder anyone in their way.

Join Bruce, Mike, and their newfound friends as they battle their way across Infected Louisiana, thwarting every foe imaginable in order to reach the sanctuary of their farm.

Blue Plague Book One: The Fall is a survivalist adventure filled with courage and betrayal, tragedy and hope.

Other book series by Thomas A. Watson: Forgotten Forbidden America, The Bonner Incident, Blue Plague, Forsaken World, Vengeance in Blood, Dark Titan, Thanos, and Viral Misery that he co-wrote with his wife Tina and Stolen Liberty when he co-authored with William Allen and M.C. Allen, authors of Walking in the Rain.

What listeners say about Blue Plague: The Fall: A Zombie Apocalypse Thriller

I'd demand a refund if I could. out of 500 books I read over last few years this is up there with the worst. the writer is immature, cocky, self absorbed and lacks any talent. None of the characters have any depth they just all join the wow isnt Beuce amazing I love him and will leave my husband for him club. He uses the word rape in jest more than 28 times in one chapter alone and even has child characters threatening to raoe each other in jest throughout. writer has a strange obsession with little girls and naked girls which I did not like at all.

a little girl diesnt lose her mom, watching her get rapednand then die just to grabs some strange mans hand and ask if she can call him daddy and most certainly doesnt then start planting kisses on his face. has the writer even met a child? done any child physiology and behaviour research then? nope. This child who is 8 doesnt then become no 2 in the adult gang that defends the group over other male and female talented members of the group as she is only 8 and has never held a gun before oh wait!! she does in this book.

she would not then call his wife mom the first moment she meets her as she has a mon regardless of being dead. this writer is utterly talentless. dont buy unless you want a laugh.

Only bad comment I can say, and it’s really bad...

The second book is not out yet😖😖!

Somebody tell me it won’t be long because I can’t deal with not listening to what happens next, I am addicted. Get this book you won’t regret it.

I waited for this re-release with Eric Shelman's narration with bated breath, and wasn't disappointed, Eric manages to bring the characters to life with a depth of personality that's a rare treat, together Tommy and Eric make a dream team. The book is full of heart pounding action, a rollercoaster of sadness and laugh out loud humour, and characters that are larger than life! Bruce is like a gruff 'pied piper' leading his rag-tag gang to safety, as Buffy becomes his side-kick as they take on 'blues' and marauders alike. I absolutely loved this book, I was hooked from the beginning, and so dissapointed when I finished, I can't wait for the next book. I received this book in exchange for my honest review.

no part of my review is an exaggeration. The story follows Bruce a 6'4" retired army ranger, nurse, martial arts expert with a giant penis. Bruce , his wife and another couple cofound a cult called "The family". Bruce and his cohusband Matt fight their way through zombies, minorities, and government officials to get back to the Family. Along the way Bruce uses violence, rape, a touch of slavery and an uncomfortable number of references to naked pubescent children to recruit obedient followers to the Family. No character development, no complex personalities, lost all interest when Bruce decides to use a 12 year old girl to help him assault a 40+ strong garrison instead of several full grown capable men with military experience. you guessed it, 40 dead bad guys and all the good guys are fine. so many better options on this site.

I’m extremely disappointed in this book, I really liked the authors description of the fighting scenes with the blue people and the gangs. The rest of the story is someone’s extremely immature fantasy of what a zombie apocalypse and a fantasized hero would look like. The story in itself about the two families is laughable and completely ridiculous, The main character Bruce is like a fantasy action adventure hero. The authors lengthy (no pun intended) description of his “junk” and the other characters reactions was odd and completely unnecessary. The authors strange obsession with Bruce the main character is just bizarre…

Wtf is wrong with this genre ? Are the only available titles those that are replete with misogyny , racism , xenophobia and an overriding stupidity amongst the characters ? “ out of wedlock” , seriously ? And this after the parents admitted to living together without the benefit of whatever evangelical bodies blessing this author adheres to .
Don’t get me started on the whole blue zombies . This book is ridiculous !

Was so good . I didn’t want the story to end . Eric Shelmen does a great job Narrating

Terrible character dialogue. Listened for 1 hour and that was too much. Need my money back.

Outstanding read I love that it some what over the top. It’s a book about Zombies it should be fun and bad ass. The guy James that gave it a bad review before me sounds like he would most def be the gimp that’s in this book. Go back to reading romance novels James!!!

Top 5 of my favorite series

This is truly one of my favorites, the narrator has captured the characters so well, now I can’t wait to do this again with the new read. Characters come to life, and I may or may not have shed a few tears. Well done

love this series. probably read it all the way through 5 times. so glad they are finally on audible so I can listen to it now as well.