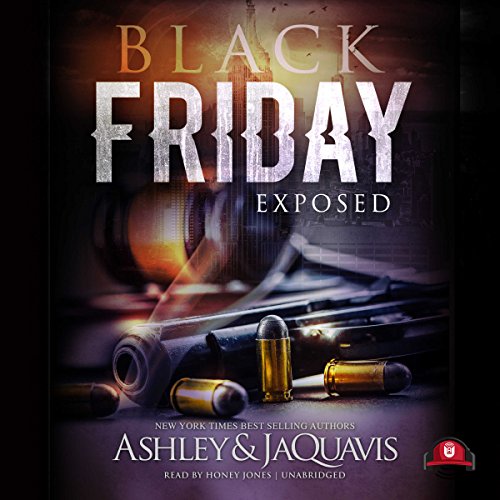 By: JaQuavis,Buck 50 Productions - producer,Ashley
Narrated by: Honey Jones
Try for £0.00

All it takes is one murder to change a million lives, and that's exactly what happens to Kasheef Williams on a cold, black Friday. After a reunion with an old friend goes wrong in a Long Island nightclub, Kasheef is forced to protect himself by any means necessary. The only problem is that prying eyes see everything. Those eyes belong to Alija Bell. After walking in on a situation she was never meant to see, she runs; but Kasheef sees her face, and he tells her that it's best for her to get temporary amnesia.

Afraid for her life and the safety of her daughter, she keeps her mouth shut, but when a tape of the murder surfaces, the only face that is visible is Alija's. Now the police are looking for their eyewitness, and Kasheef has to get to Alija before her day comes to testify against him in court.

In this dramatic, hood-savvy tale, things aren't always as they seem. Somebody holds the ticket to the jury's verdict. Lies and truth collide. Everyone has a different angle, but the only question is: who has the most influence over Kasheef's fate?

What listeners say about Black Friday

OMG I love these authors BUT I need a good ending story... JUST once!! Still GREAT book!!

I love this book. the plot is superb. awesome! 5star rating and definitely recommended !

Could have had a happier one. nevertheless didnt see it coming lol! That definately was suprising!

This book and Honey Jones was prefect. Great Book and Drama! I want more, please.

He didn’t deserve that. I read the reviews and you know what I actually agree I wish this ended happier. It was a great story what a turn. The reader was perfect

just once I would like to read one of their books

I understand that this is a husband-and-wife collaboration and they have put out some books some have been really good some have been repeats of the books that they have just put out this one right here was just another repeat I don't understand can you come up with different plots that's at the end of everybody have to always lose I know plenty of Street dudes who come up stay up and are loyal to the women that they love not every single book that you guys have to write together has to turn out the same way get a new story line a new plot please I am returning this book it was awful!

this book was interesting waiting on Book 2 the sequel.
I really enjoy the books by Ashley & JaQuavis keep them coming
listening to your books is how I make it through rough work days.

I’m speechless yet pissed off too!! I could kick Aaliyah’s funky broke hood rat ass for doing Keef that way 🤬🤦🏽‍♀️. Poor Keef I felt like all he wanted was to be loved by the right woman. Smh. He didn’t ask for any of this drama. It was literally his life or Aleem. Damn!! Ash & Jay I love y’all duos book together. This one definitely had me in tears at the end.

Why the ends of ur books always have to be so sad, but overall it was a great story.
😟😟😟😟😟😟

Ashley and JaQuavis two thumbs up. awesome read. Will there be a book two?
A fan.