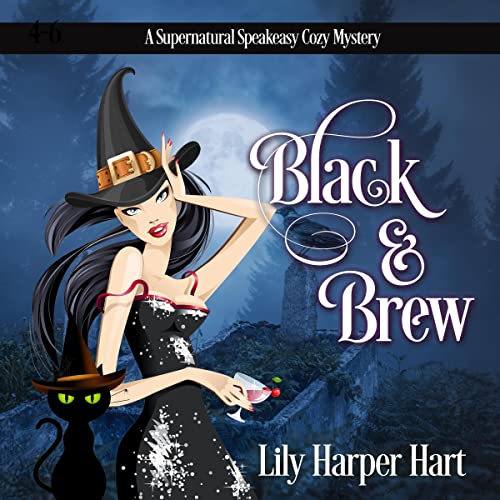 By: Lily Harper Hart
Narrated by: Meghan Kelly
Try for £0.00

The day Ofelia Archer has feared her entire adult life is here. Despite the happiness she’s been feeling since her engagement to Zach Sully, when the inevitable happens and her father has a breakdown on Bourbon Street, her life turns upside down.

Oscar Archer has been fighting a losing battle with mental illness for years, but when he finally hits a wall and is taken to the hospital against his will, he blames Ofelia. Despondent, she’s not paying attention, and when a shadow attacks and leaves her for dead, a new mystery is afoot…and it makes for an opportune distraction so Ofelia’s mind isn’t constantly drifting to her father. Unfortunately, the shadow leads to the one person Ofelia never wants to see again.

Sebastian Gendry is facing serious charges for the beating of Ofelia’s brother. When he slips his tether and disappears, Ofelia realizes he and the shadow are linked…and their paths lead right to the LaLaurie Mansion.

New Orleans has many sordid stories, but none are quite as bad as Delphine LaLaurie’s tale. When Ofelia starts digging, she realizes Sebastian has ties to the family…and they’re the sort that can never be broken.

A shattered heart won’t stop Ofelia. She promised Sebastian he would pay for what he did to her family, and she meant it.

Dark magic is loose in the French Quarter, and it’s going to take Ofelia’s entire motley crew to overcome it. Even then, heartbreak is imminent. Can Ofelia make it through the darkness to find the light on the other side?

What listeners say about Black & Brew

This series (and this author) get better and better. A wonderful story that is more complex than a lot of paranormal cozies out there. The layers are fascinating. Never stop, please. Ofelia and Sully and the gang are well worth the listen.

a magical mystery in new Orleans

sully and Ophelia are back in danger again. with help of friends and an old foe the battleground is set, let the magic fly.

I have enjoyed this series very much. I wish there was a little more suspense when the villans are being dealt with. it just seems like it is rounding up cattle as the villans are just not a match, or too dumb, or too weak to be a real threat. Once the threat is dealt with, the books end very quickly. I guess I like them too much and want more.

Ok, There Were Less

I really like this series. Cannot wait for the next book! I was heartily thankful to hear far less "I mean" and "huhs" this time, maybe the author is filling the book with REAL text instead of filler words now? I hope the next book omits them altogether. It would indicate to this listener that the teenager had finally left the writer's building!

OK , let me preface this by saying I am born and raised New Orleans. I love the stories she tells and have NEVER had issue with the narrator.....until now. The names of the streets were said all wrong and it annoyed me greatly. I do love how Amanda M. Lee pulled in the LaLaurie Mansion and the story around it. It's just the narrator who butchered the names of the streets and places that annoyed me.

not only does the continuing saga of Fe and Sully make me happy, so many things are going On in this one!
correct me if im wrong, but is AML (finally!) 'coming out of the closet', so to speak, as LHH? i personally love you no matter Who you want to be!;)
💗💗💗