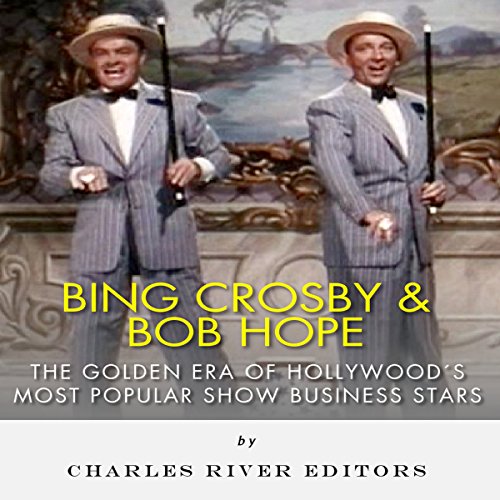 By: Charles River Editors
Narrated by: Steve Marvel
Try for £0.00

"You never get tired unless you stop and take time for it." (Bob Hope)

"I think popular music in this country is one of the few things in the 20th century that have made giant strides in reverse." (Bing Crosby)

In 1948 American polls rated Bing Crosby "the most admired man alive", and it's no surprise given how popular he was across every major form of entertainment during the decade. With a string of major hits, Crosby was the most popular singer in the country during that era. And as good as he was at singing, Crosby's work with radio technology helped pave the way for multitracking songs and making it possible to broadcast the same radio programs across the country without cutting another live version. All told, Crosby sold an estimated 500 million records in the 20th century.

In addition to being one of America's most beloved singers and an accomplished radio presence, Crosby not only made popular movies but acted well enough to be critically acclaimed. His Road To... movie series with Bob Hope produced some of the best-selling movies of the 1940s, 1950s, and 1960s.

Of all the show business icons in American history, one of the most beloved was Bob Hope, whose career spanned over six decades across film, television, vaudeville, comedy, and touring and earned him uncountable accolades. On the day of his 100th birthday, more than half of the states in America declared it "Bob Hope Day". Along the way he performed so many United Service Organization (USO) tours visiting troops that Congress made him the "first and only honorary veteran of the US armed forces." Incredibly, he was given honorary awards for his career at the Academy Awards nearly 40 years before his death and decades before he actually retired from public life. By the time he reached his twilight, he was an instantly recognized institution unto himself.

What listeners say about Bing Crosby and Bob Hope: The Golden Era of Hollywood's Most Popular Show Business Stars