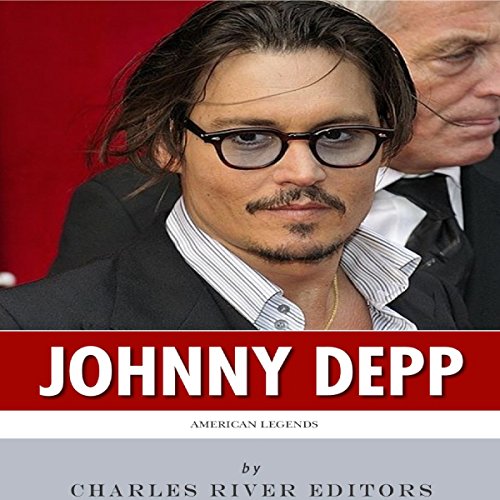 By: Charles River Editors
Narrated by: Morley Shulman
Try for £0.00

Throughout the history of Hollywood, perhaps no actor has a reputation as unique as Johnny Depp. Depp began his career in a very traditional manner by being a teen heartthrob on shows like 21 Jump Street, but as he once admitted, "As a teenager I was so insecure. I was the type of guy that never fitted in because he never dared to choose. I was convinced I had absolutely no talent at all. For nothing. And that thought took away all my ambition too."

However, that ambition clearly resurfaced over the last 25 years, because Depp has since taken on some of the most unique and eccentric roles in the industry, explaining, "I like the challenge of trying different things and wondering whether it's going to work or whether I'm going to fall flat on my face." In addition to being renowned for portrayals of people like John Dillinger and Hunter S. Thompson, Depp has played some of the most memorable fictional characters of the last 30 years, including Edward Scissorhands, Captain Jack Sparrow, and Willy Wonka, making his larger-than-life roles pop culture fixtures and helping the movies bank billions of dollars. Of course his success hasn't been limited to the box office, as he has also won countless awards and been nominated three times for the Oscar for Best Actor. It's no wonder Depp was recently named the highest paid actor in the world.

Although Depp has played some of Hollywood's most famous characters, he has also cultivated one of the town's most alluring and mysterious reputations. Depp has matured from being a teen idol to People's Sexiest Man of the Year on multiple occasions, but even as he has gained millions of fans across the globe, he has maintained enough distance from the spotlight to leave people wondering what he's truly like, and some of the glimpses suggest he can be just as eccentric as his characters. Perhaps not surprisingly, he has approached it with some of his trademark humor, quipping, "I pretty much try to stay in a constant state of confusion just because of the expression it leaves on my face."

American Legends: The Life of Johnny Depp examines the life and career of one of America's most famous living actors.

What listeners say about American Legends: The Life of Johnny Depp

Just as there are B rated movies...I feel this is a book version. The narrator is terrible... sounds like it was recorded in someone’s basement... other than a bunch of Johnny Depp quotes with a little elaboration on each one… There was nothing in this book… I was very disappointing. Bios memoirs and biographies are all I listen to… This one was one of the worst.