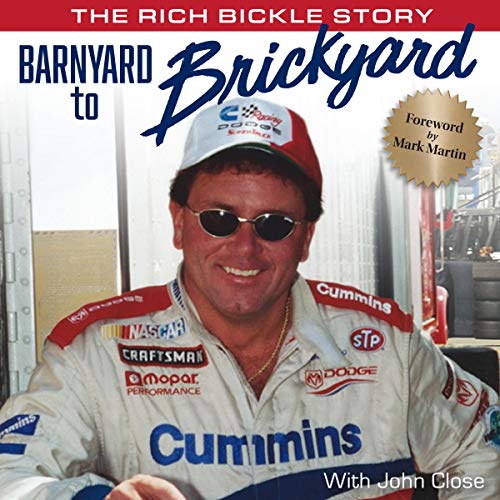 Rich Bickle’s rock star lifestyle of fast cars and legendary partying ranks among the more colorful journeys in auto racing history. An imposing figure for a race car driver at six foot five, Bickle’s larger-than-life persona and burning desire to succeed took him beyond the Wisconsin short tracks he mastered early in his career to include the bright lights of Daytona, Indianapolis, and other stops on the NASCAR circuit.

Bickle, with the assistance of author John Close, describes the relationships, good and bad luck, and garage politics that often play a larger role in determining fame and fortune than talent alone. The brutally honest narrative pulls no punches in giving race fans an inside look at a career that both benefited from, as well as was hindered by dealings with some of racing’s biggest stars.

What listeners say about Barnyard to Brickyard: The Rich Bickle Story

From a short track racer..

It’s excellent! All the BS you thought might be true about NASCAR’s shady politics and favoritism.. is brought forth in this hilarious racing autobiography. Along the lines of Smokey’s “tell it like it was” book, this one too hurt a few feelings when released.