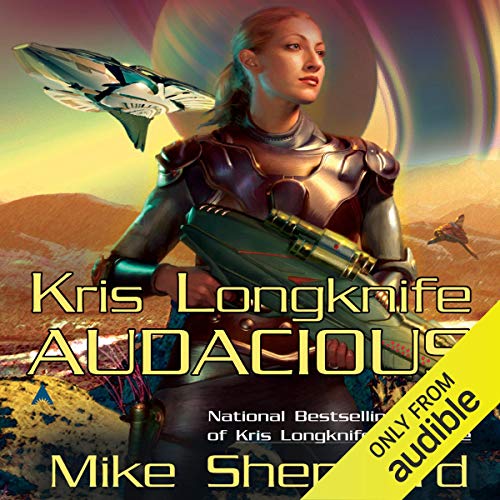 You can't keep a good woman down - Kris Longknife returns.

Once again, Kris finds herself caught in the crosshairs of unknown enemies who want her dead. Factions, both legitimate and underground, vie for control of the planet New Eden. And someone is taking advantage of the chaos to unleash a personal vendetta against Kris.

What listeners say about Audacious

the pace is excellent

Bring on the next one! by far the best of the series!

This is book five in the Longknife series. Navy Lieutenant Kristine Longknife, Princess of Wardhaven is going on vacation to the planet New Eden. Of course, her family assigns her various diplomatic and military obligations while on the planet. These jobs are to stand around looking pretty during diplomatic occasions and dealing with paperwork.

Two assassination attempts convince Kris and her bodyguard Jack something is wrong in New Eden. They dig deeper into the planet society and find a deeply conflicted planet on the verge of a revolution. Those who tried to kill Kris picked on the wrong person as Kris shoots back. They also find that as the planet falls into chaos the Peterwald are trying to take over the planet.

More is revealed about Abbeys past in this book. Seem the author is gradually peeling away Abbeys mysterious background in each book. The characters are interesting and the plot is full of twists and peppered liberally with sharply described action. The pace of the story is fast. As with each book the author sprinkles the book liberally with humor. Every time I read one of the books in this series I become more fascinated with Kris’s computer Nelly. I would love to have a Nelly of my own. Dina Pearlman narrated the book.

I am writing this because i think it is one of the best series books out there. Mike Shepherd always tells a good action packed story. This one has a female lead and she has some great friends that are willing to die for her and what she stands for. The narrator Dina Pearlman is also one of the best !!
ALWAYS REMEMBER TO READ THE BOOKS IN ORDER.

Ode to the first two Amendments

Audacious can be read as a cautionary tale for any society that considers itself evolved and safe simply because it is technologically advanced. The major conflict of New Eden, without a doubt, is its lack of suffrage for all citizens, but the reason why living on New Eden is unsafe boils down to a lack of the first two amendments. There is a lack of free press, and the powerful pay dearly to keep the media ignorant of any crimes. The second is the right to firearms. New Eden is a “safe” society, where no one, not even the military, should have deadly weapons. The problem is that in New Eden, like in most of our cities, those who operate outside the law already have weapons, leaving the law abiding vulnerable.

Audacious goes back to the wonderful military feel of the original Mutineer. There is an inspiring scene where Kris is invited by the marines to jog with them in the morning, but after she is detained by local authorities, a bunch of marines, including one who is injured, join to stand by her. Kris realizes at that moment that, even though she’s Navy, she has been adopted by Corps. Kris’s spine straightens when she realizes that they’re willing to die for her and, in return, she’s willing to die for them. I also enjoyed the scene toward the end of the audiobook when after rendering honors to fallen Marines, Kris and her men leave New Eden to a futuristic rendition of the Marine Corps Hymn.

This audiobook also gives us a lot more on Abby. We meet her mother, sister, and niece, and get to see the neighborhood on New Eden where she grew up. It explains a lot about her motivation and character, and she even gets a possible love interest in this audiobook.

On Narration:
Dina Pearlman’s reading of Audacious reminded me of her reading of Deserter. She was back to a faster pace, the authoritative tone, and the solemnity necessary for war and battle. I miss her Tommy accent, but there were no Irish or Lorna Dune people.

Didn't get far enough to review the story

The short description of this book made me very interested. Unfortunately, I didn't get far enough into it to actually review the story. I give it 3 stars because Audible makes me review it before I can write a review, and because I don't want to penalize the author when it's not his fault this production is awful.

Because it was bundled in a 2 for 1 credit, I ended up getting book 5 before I'd ever heard of book 1, but that isn't what bothers me. What bothers me is this narrator. She is focused so hard on pronouncing her t's and d's and p's that she has completely lost the natural rhythm of a sentence. I found myself analyzing how a sentence -should- have been spoken and losing the next few pieces of the book. I cannot under any circumstances recommend this book. I got stuck in my car for 3 1/2 hours to drive 5 miles and couldn't even bring myself to turn on this book... If it weren't a freebie, I would ask for a refund.

Each of the Longknife books thus far has explored a culture or milieu and this one takes a more noirish turn with femme fatales and seedy inspectors. But we are also given a lot more background on Kris' mysterious maid, Abbie, since this is her homeworld.

Story: King Ray has sent his great granddaughter to New Eden as a glorified supply manager in an attempt to get her as far away from the Greenfelds as possible. Supposedly - because Kris has begun to see a pattern of being assigned to places with hidden troubles and soon she will discover a conspiracy that even she, with all her resources, may not be able to handle.

For New Eden, Shepherd has created a world that was one of the first colonized and therefore is hidebound in old Earth politics: sections of the planet run by Chinese, American, European, etc. None trust the other and the entire world is highly disconnected. Kris runs into bureaucratic nightmares and officials working against their own interests just to keep the status quo. Into this mix, enters Vicky Smythe Peterwald - who has an axe to grind against the woman she feels killed her brother. There are plenty of confrontations and assassinations as well as the usual big battle in the end.

We do get chunks of POV from Abbie as she confronts her past and becomes embroiled in local politics. I really enjoyed those sections since they helped define Abbie and give us more insight into why she has the special skillset she does.

In all, very enjoyable. I listened to the Audible version and the narrator is excellent, as always. She has a great way of making each character unique and you never have to ask who is talking.

I just found the Kris long knife books and I plan to read them all. Here's hoping the rest are as good!

Would recommend, especially to ex-military. The military attitudes remind me of old times.

Favorite character was Kris Longknife- never gave up even when it seemed hopeless.

Which character – as performed by Dina Pearlman – was your favorite?

Kris Longknife because of the personality that comes through the telling of the story.

Sure, it looks hopeless now... but wait

Could have done without the excessive lovey dovey stuff between Jack and Kris, other than that...outstanding.

same everything..cow milked dry....i liked it anyway cuz i had nothing to do...cheers to all of you reading