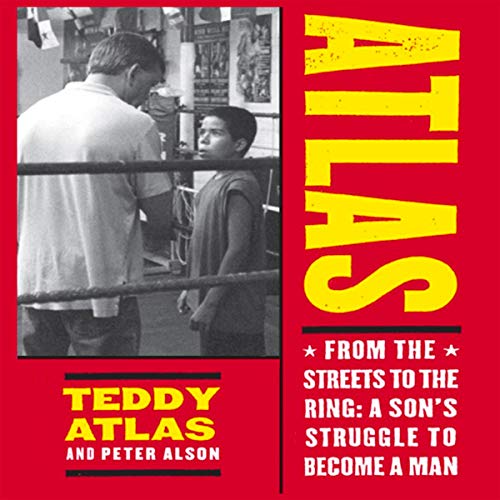 "Of all the people who have affected my life and influence the choices I've made, none has been more important than my father."

So begins the autobiography of legendary boxing trainer and commentator Teddy Atlas, who grew from the rebellious son of a doctor to a man who embraces, and lives by, his father's values and code.

In this gritty, spellbinding tale, Atlas recounts his fascinating life as a juvenile delinquent on the streets of Staten Island; as a boxer and Golden Gloves champion under the tutelage of famed trainer Cus D'Amato; as a companion to the dangerous, unpredictable Sammy "the Bull" Gravano, up until the day Gravano turned rat and brought down crime boss John Gotti; and as a trainer of champions and contenders, among them 14-year-old Mike Tyson and heavyweight Michael Moorer, whom he led to the crown with a win over Evander Holyfield.

Equally engrossing are Teddy Atlas's accounts of training Twyla Tharp, dancer and choreographer, for her successful comeback at the age of 42; his work with actor Willem Dafoe, preparing him for his role as a concentration camp boxer in the film Triumph of the Spirit; his journey to Poland to choreograph the film's boxing scenes; and his own performance in movies such as Play It to the Bone.

In sharing his stories, Atlas reveals the philosophy by which he lives. Like Teddy Atlas - inimitable, tough, honest, and wise - this book inspires. It is about so much more than boxing. It is a story of overcoming hardships, of compassion for those in need, of tremendous personal integrity, and of personal and professional triumph.

What listeners say about Atlas

Gifted storyteller, great to her the book in his own voice. Full of stories, engaging listen. Listened to Teddy for several years, came here off the back of his YouTube show.

brilliant, enjoyed every minute. Teddy is very honest and critical of himself at times which makes the book more real.

Hi from over in the UK. Your storey is inspiring. The way you grab life and impose yourself, the way you have improved from your experiences and what you have taught others. Your a humble brilliant human being. Thank you for this. I also have the book, this is fantastic I hope your able to provide a second book one day. Good luck with everything you do Teddy.

The life and times of a great man

I’m not a massive boxing fan, or on of autobiographies, but what teddy has done in his life makes you think, and he teaches you a lot throughout the book, I was melancholy that it was going to end. A sign of a good book

The real chamber of truth

I’ve loved listening to Teddy Atlas ever since I heard him on the old fight night games.

He present vivid insight to the boxing industry. He brings even more depth to an amazing sport.

Loved the book, love the man

awesome book , loved listening to it . atlas is a legend and true old school gentleman

Teddy is a great storyteller, and very passionate about the sport of boxing. Plenty of content in this book, a lot of "hard dad" stories.. i.e. "i knocked this guy out.. then I took on 5 bigger guys". But that's to be expected if you're writing your own book.

Some great stories about Cus, Tyson, Moorer etc. Some stories you gotta take with a pinch of salt.

Overall I recommend this book to any boxing fanatics and fans of Teddy. His commentary on boxing is some of the best, and allows new fans to understand advanced stuff.

A true legend to the sport!

teddy atlas is so much more of a person/story than just being involved in tyson. if you are looking for an interesting real life read, get this book. ive learnt a lot from this book. teddy when are you coming to liverpool england...i loved every second of this book!

Even better second time round 👌
As a youth worker I could really relate.
Pushing that kid in the wheelchair into the deep end of the pool had me in stitches, I pull stunts like that yo get the best out of people! Unorthodox but gets results!

brilliant autobiography, teddy's honesty and the fact he reads it himself makes you feel like your reliving his stories with him . a great man I wish I had a teddy atlas in my neighbourhood

I'm a boxing fan, having followed the sport pretty closely from roughly 2000 (when I started subscribing to HBO) to 2015 (when I cut the cord and found HBO's boxing coverage much reduced on its streaming service). In other words, I'm probably a better fit for this book than most, but I think it might appeal to everyone.

Atlas' life (so far) might not have changed the world, but it sure has been interesting. The book contains many, many compelling moments both relating to boxing and not. What he has to say about facing fear probably makes the book worth reading even for the non-fan.

The audio version was released in 2019 (I was surprised to see the book came out in 2006 - not sure why the massive time lag) and read by the author. Atlas is a terrible narrator. I was accustomed to his style from his work on ESPN's Friday Night Fights, but I think someone who's not familiar with him might struggle at first. Here's the thing though - Atlas isn't really narrating his book, he's reliving it. And from that perspective, he's superb. He laughs during the funny parts and gets choked up during the tough parts, and he was making me do the same. I can't imagine the print experience would be nearly as good.

Phenomenal story and human being. Such a blessing it was to learn about Teddy Atlas. “A real pro.”

I really enjoyed this book. I have been a fan of Teddy for years, since he was on Friday night fights.

I am huge boxing fan, so maybe bias but teddy is my favorite boxing guy, so real so street.. he the man I have listened now 6 times.. teddy reads it himself.. it’s hard to shut off.. so much detail and emotion great read for anyone.. I am an online fitness mentor and I have all
My clients read it! For life perspective

So enjoyable to hear the story of a man’s life in his own words / voice. It’s an incredibly interesting life and well told at that.

Great story read by Teddy himself

This book is about boxing as much it is about life. Teddy Atlass is an amazing individual and the story is so inspiring.

Teddy delivers by way of his honesty as well as his performance… the story is almost unbelievable… if it wasn’t Mr. Atlas, I’d be hesitant to believe that everything in this book happened the way it’s told… There are many lessons packed into this one book… That is the reason for me tilting my review, “Literally Life Changing”… thank you Mr. Atlas and all contributors!

teddy atlas is a national treasure!!

so honest and touching. binged the whole thing in a few days. great listen and the interviews with updates is fantastic.

I’ve always liked Teddy Atlas. I think I made the right choice to read his book. Any time he was calling the fights earlier in his career, you knew you were going to get an honest opinion know matter what.
I think everyone knew he was going to be honest when he called the Jeff Horn vs Manny Pacquaio fight and told Jeff Horn that he lost the fight.