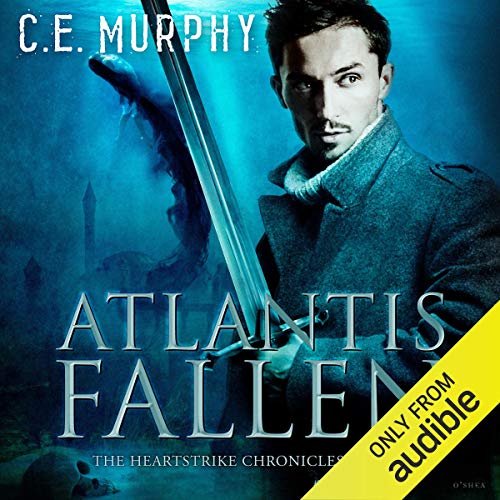 A man so ancient his early history is lost to time.

A woman who has nothing to lose.

Lorhen, oldest and most ruthless of the immortal Timeless, put aside the sword long ago for a quiet life. But peace doesn't last forever, especially for a man whose age can be counted in epochs, and the mortal life he's built unravels as the Keepers, a society of historians who record Timeless lives, learn that he's been hiding in their midst.

Then an archaeologist's claims of finding Atlantis brings back millennia-old memories, and Lorhen is drawn unwillingly into intrigues aeons in the making - and deadly enough that he may yet face the heartstrike blow that will unleash his power on the world.

What listeners say about Atlantis Fallen

Make no mistake, this is a very blatant fanfic of Highlander: the Series. One of the author's blog posts on her websites even admits it was originally fanfic, and it's not at all difficult to guess what of, if one's familiar with that show.

So, coming to it from the perspective that it's a blatant Methos fanfic (with a side helping of Duncan and Joe--although Joe is now a black woman), it's pretty entertaining. The author introduces plenty of original elements and writes the Highlander characters well. I'm curious to see where she takes the story in later books in this series, not being tied to what actually happened in the Highlander universe.

Can not wait for the novellas in this series to become audiobooks. Loved the book when it came and now the audiobook performance added layers to the enjoyment. Perfect for when the world is rather grim and we need a story were it all works out with friends and adventure together.

This was well written while at the same time there wasn’t enough engaging content. It wasn’t until the last third of the book that the author finally finished establishing the story and its characters to begin progressing the story and things start to happen. I don’t really know if I’m going to continue with this series once the second book comes out. I don’t want to have to listen 6-7 hours again before a real story unfolds

The synopsis of the book was appealing enough that I invested six hours of my time and a credit. I was extremely disappointed. There were mixed reviews on C.E. Murphy’s Highlander element of the book. I was fine with a Highlander, the disappointment; she castrated the Highlander! For six out of eleven hours, he was a scholar!

Lorhen, was the oldest immortal. The plan was to fake a killing of his name as the oldest and live under another name. Lorhen is attractive, cocky, funny, and intelligent. He apologizes by flattering his friends. He has an interesting assortment of friends composed of keepers and other immortals. Their discussion at the beginning of the story is reminiscent of their first fight and a keeper’s (watcher is the Highlander word) discovery of Lorhen’s true nature.

If you are familiar with Adrian Paul’s performance of Duncan Macleod as the Highlander, put him in the opening scene. The dialogue and the companionable ribbing is classic Duncan Macleod. Lorhen and his companions go to investigate the authentic of the discovery of Atlantis, and the story becomes boring.

Lorhen has an extensive past in Atlantis. His pursuits while in Atlantis were scholarly BORNING and romance. Of course, there is always someone who has devious altruistic interest. Like I said, six hours of my time, and Mr. devious was just getting there.

With over half of the book completed and not one real immortal fight, I was finished with the book. When you encounter an immortal, the last thing you want is hours of them pontificating about being gods, looking for answers about their existence, or renewing old friendships, over COFFEE.

I am an action kinda of gal, and this is one sleeper of a story. I have read other books by Murphy and enjoyed them. A story about Atlantis has great potential. What became distracting is the attempt to address Lorhen, as a scholar in Atlantis instead of as an immortal. When you describe a Highlander, I expect to see swords swinging; heads decapitate, and the Quickening. Can you see the Quickening? You remember those shots of Macleod from the back with his arms outstretched, his coat billowing and the lighting arching from his body? If you cannot give me that, I am not happy.

it was a good story but was quite obviously a reincarnation of The Highlander movies and series. the main character seemed to be based on the character Methos.