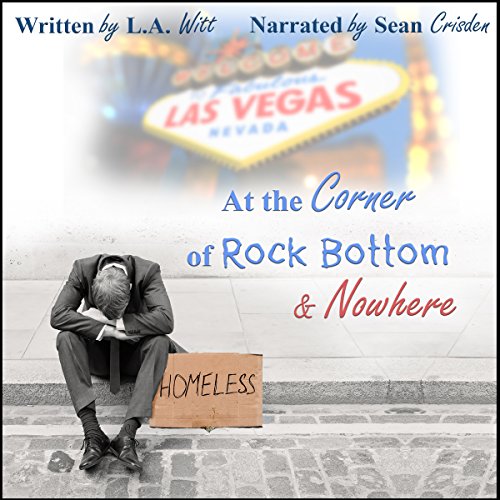 At the Corner of Rock Bottom & Nowhere

Blackjack dealer and stripper Adrian West has lived in Las Vegas long enough to be numb to beggars on the Strip. Their destitution is a sad, ugly part of reality in a city where people win or lose it all at the tables every single day.

So he's at a loss to explain why the homeless man in the suit catches his eye. Why he can't just keep on walking like he always does.

Former advertising executive Max Reynolds is a Las Vegas cliché. After a run of bad luck costs him his boyfriend, his job, and his home, he's decided to go out with a bang - a week of high rolling capped off with a peaceful overdose in a luxury hotel room.

When a last second epiphany keeps him from finishing the job, he's ready to live again...but he doesn't have a dime to his name. He has nothing.

That is, until a stranger takes him in off the street. Max may have hit rock bottom, but now he has a glimmer of hope and an unexpected friendship.

A friendship that just might turn into everything neither man knew he was missing.

This novel is approximately 51,000 words.

What listeners say about At the Corner of Rock Bottom & Nowhere

What made the experience of listening to At the Corner of Rock Bottom & Nowhere the most enjoyable?

Because it was soo different from most books, however do u have someone actually notice a homeless person with more than pity and because of that this young man Adrean meets someone who's way more than what he seems

I loved how organic this seemed and the fact that sex was not the 1st thought it was more about the heart and soul I loved that because it made the story something I needed to hear.

Have you listened to any of Sean Crisden’s other performances before? How does this one compare?

Nope 1st one LOVED it

Nothing is what it seems

This would be a fantastic story to turn into a movie and yet not sure if I would do a second book not sure it Ned's it.

I listen to this book over and over the characters was great story line great as well.

"We weren’t even supposed to cross paths" ... Max

Would I listen to it again: yes
Did the story keep me engaged: yes
Was I invested in the characters: yes

Story comment: Likeable characters, story is well written and has a good pace.
Max's mental health was well handled and meeting Adrien wasn't a band-aid fix to make his world right again. I liked that Max's character accepted Adrien the way he was and didn't try and change him.

Sean Crisden is among my favorite narrators. His rhythm, changes in pitch and intonation, the cadence of voice in narration all work to bring the story to life. Each character had his own voice and I felt their emotions to be completely immersed in their story.

i guess the rich don't always get richer. opposites do attract. well written and great narration.

A pretty well-written, though predictable, romance. Skip the trite epilogue if the inevitable HEA romance trope makes your teeth ache.

Fantastic story! As always, L. A. Witt proves that she knows what the hell she's doing! Sean Chrisden was tremendous and brought the characters to audio "life" seamlessly.