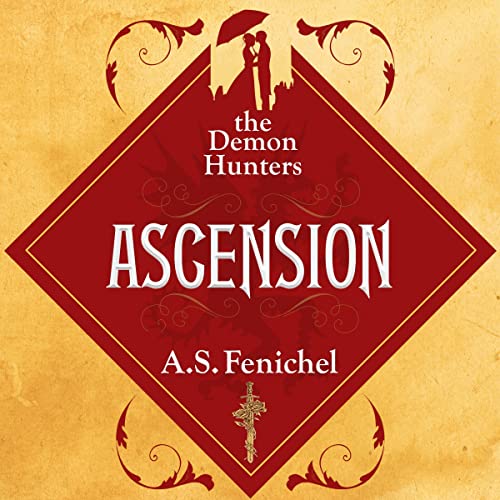 By: A. S. Fenichel
Narrated by: Aria Holland,Piers Ryman
Try for £0.00

When demons threaten London, even ladies must answer the call...

Lord Gabriel Thurston returns home from war to find his fiancée much changed. She's grown from a sweet girl into a mysterious woman who guards her dark secrets well. When he sees her sneaking away from a ball, he's convinced it's for a lovers' rendezvous. Following her to London's slums, Gabriel watches in horror as his fiancée ruthlessly slays a man.

Lady Belinda Clayton's only concern was her dress for the next ball - until demons nearly killed her, and a group of demon hunters saved her life. Now, a lady by day, and a demon hunter by night, she knows where her duty lies. Ending her betrothal is the best way to protect Gabriel from death at a demon's hands.

Gabriel soon realizes, like him, Belinda has been fighting for her country. He joins in the fight, determined to show her that their love can endure - even at the gates of hell.

What listeners say about Ascension

[received free for review]
I was intrigued by the book description, but put off listening to this for some time. I suspected it would be a cozy(ish) story with a somewhat over the top forceful (I am woman hear me roar) heroine; thankfully, in my opinion, it was neither of those.
This story is about struggling to come to terms with adverse changes, and getting through them with the love and support of family and friends. It is a historical paranormal fantasy set just after the Napoleonic war. There are several steamy romance scenes between the heroine and hero. And lots of demons slain during the crafting of this book.
Looking forward to the next one in the series.

Belinda and Gabriel compliment each other well and there is genuine chemistry between the two. Belinda is something of a regency era Buffy, hunting down and killing rogue demons, whilst still maintaining the appearance of a typical lady of the ton. Gabriel pursues Bel despite her attempts to break their engagement and has some very attractive personality traits. There are some fun secondary characters, who I hope will get their own stories in later books. The concept of a regency era, female demon slayer is unusual to say the least, but it really works here. I liked the male narrator but felt the female narrator over pronounced some words, which meant that the narration sounded a little stilted at times.

This is the first book in The Demon Hunters series, a Paranormal Regency Romance. This is a standalone story within the series. Belinda and Gabriel’s story is original, interesting, and captivating, filled with danger, demons, and twists and turns. The characters are complex, and well developed. This first installment is fast paced, with an entertaining and suspenseful ending. Aria Holland and Piers Ryman did an outstanding job with the narration. I enjoyed it. This is a great start to the series, and I am looking forward to listening to Deception, the second book in the series. #SpectrumAudiobooks

This was a good introduction to the series. The characters are developed very well and I instantly liked Belinda and Gabriel. I really liked Gabriel. He never wavered in his love of Belinda even when she kept telling him they couldn't be together.
The story started off well with Gabriel following Belinda and finding out about Demon hunting. The story dragged a bit for me in the middle as it concentrated on their relationship and intimate scenes and I wanted to see more of the demons and fight scenes.
The story and pace really picks up in the last quarter and it was difficult to put down. Suspense filled action takes centre stage when the demon hunters have to make two daring rescues. Thor was a surprise favourite side character and I hope to see more of him in the next book. I'm hoping that the background to the demons and why they are invading London will be explained as the series progresses. I'd also to learn more about how Belinda's father got involved in demon hunting and training hunters.
So, with all that there's much to look forward to in subsequent titles.
I voluntarily reviewed a copy provided by the publisher.

This is book 1 in the series and can be read/listened to as a standalone. It has a weird chapter 18a and 18b at the end. You will think you are having Deja vu. Just skip the second retelling. It'sthe same as the first without an epilogue. The story has a strong female lead who grows up while her fiance is away in the war. She experienced a life changing event and rather than ending up terrified of life she decides to fight against the creatures that wronged her. The H returns to find the h is much different but his love remains steadfast. There are a few explicit love scenes and sex before marriage.

A good start to a series. I enjoyed the mix of regency and demons. Though I do wish there was more lore for the demons in the story and the romance in the beginning was a little troubling for me but as it progressed it got a lot better. The action was great and intense. The conflict kept me on the edge of my seat and I loved the side characters. I’m curious to see more of those characters as the story progresses.