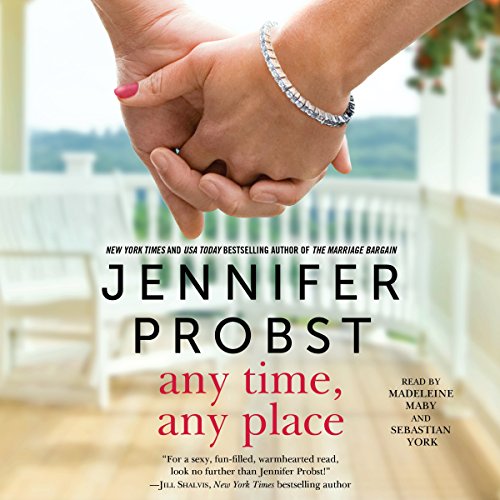 Any Time, Any Place

By: Jennifer Probst
Narrated by: Madeleine Maby,Sebastian York
Try for £0.00

At 15 years old, Raven Bella Stratton's father was killed in a horrible car crash. The bigger shock was the discovery of a woman with him - Diana Pierce - and their two fully packed suitcases with airline tickets to Paris. Devastated by her father's betrayal, Raven went to live with her aunt, never truly overcoming the traumatic event. When she discovers that the mysterious woman had a family with a husband and three boys, Raven vows to leave the memory of her father behind.

Until Dalton Pierce visits one night and suddenly her past challenges her future....

Leaving his life in California behind to run Pierce Construction with his two older brothers, Dalton Pierce has enjoyed returning home and studying his passion of woodworking. But when he visits the local bar with his brothers one evening, he's immediately drawn to the smart-mouthed, badass, sexy bartender who sets his body on fire. Unfortunately, she doesn't seem as intrigued by him, and his multiple advances are met with rejection. When he offers to restore the bar back to its original glory, he begins to work with her on a daily basis, and falls harder. His plan of seduction slowly weaves a web around them both, until they are caught up in the spell. But Dalton doesn't know the secret that can either destroy them both...or finally mend two broken hearts.

What listeners say about Any Time, Any Place

Jennifer Probst has been one of my favorite romantic authors and this series ranks right at the top!
Sebastian York is wonderful as alway!
While I do enjoy Madeleine's work; I feel during the male portion of her narration she tries way too hard!

I'm hooked again to another Probst series, and that's okay because I always find her reads melo-drama free and entertaining.

I loved the first book in this series and as expected this one did not disappoint. Jennifer Probst continues to delight with the same amazing characters and story-line.
The narration of Sebastian York is always amazing and Madeleine Maby has improved somewhat from her staggered reading from the first book.
The story evolves and becomes more mysterious and really hooks you in.
Another book well worth the credit.

A tale of two narrators

I enjoyed the story and Sebastian York is always a pleasure to listen to. Unfortunately. The female. Narrator. Talked like. William Shatner. It was. Very. Annoying.

I'd never read a book by this author

Good read I love Sensation York!!! But Madeleine Many was Auful!! Her voice was so flat and no enthusiasm at all I'll probably read the other book I liked the cast of characters

I can't decide how I feel about this book

This was an unexpected book for me. I didn't know a lot going into it, but I liked the idea of the forbidden love and how the two protagonists intertwined. However, the story revolved so much around their sexual chemistry that it seemed to not really go anywhere. Don't get me wrong, the steamy love affair left nothing to be desired, but the actual plot was stale.

The use of two narrators was unnecessary, especially since the book was written in third person. There wasn't a need for both a female and a male narrator because the book was never told from either of their points of view. Also, the woman's voice when she was speaking for the male character didn't match the actual male character's voice, so it was disconnected at times. I thought that the story should have either been told by the male narrator or a different female, as I didn't care for her voice very much. I didn't feel the same about the male. It was a bit predictable, but I did end up getting invested in the characters and found myself anxious to get back to the story, so to me, it is hard to rate because I felt different about certain parts of the story. I probably wouldn't read this novelist again however, the story was not dynamic enough for my taste.

Dalton Pierce is the youngest and still trying to prove himself in the family business Pierce Brother’s Construction. He doesn’t believe in permanence when it comes to his love-life, preferring casual hookups with no attachments. As fate would have it, the owner of a popular bar, Raven Hawthorne appears immune to his charms and isn’t interested in a casual hookup. The more she rebuffs his advances, the more intrigued he is. When Raven hires Pierce Brother’s Construction to renovate her bar, Dalton sees it as his opportunity to show her that he isn’t the shallow ladies’ man she believes him to be.

When they finally give into the sexual tension, Dalton and Raven realize they may have something special. But Raven knows things about Dalton and his family. In fact, Raven targeted the Pierce family for revenge. Will the past hurts keep Dalton and Raven from embracing a future together or have they built enough to overcome the secrets?
I enjoyed this story and the characters. I felt drawn to the story and the people in it. The author Jennifer Probst did a great job of creating characters that the readers could empathize with and root for. Both Dalton and Raven were good people being held back from love because of the way they lost their parents. Their inability to find out the circumstances of car accident left them unable to trust people as well as the institution of love. Their slow crawl to a relationship allowed them to chip away at their respective walls. They laughed together, they had fun together and they eventually found out they were compatible together. I struggled with the fact that the man who didn’t believe in marriage or forever said such romantic and poetic words. In fact, Dalton did and said a lot of forever-ish things. I also don’t believe for a second that Dalton and his siblings wouldn’t have wanted to know everything there was to know the man who was in the accident with their mother including his child. That part seemed unrealistic to me. The chemistry though was tangible and the connection intense. With all that happened, the author kept the character’s authentic to themselves and I enjoyed the continual restoration of Dalton’s relationship with his brothers. What I do love about Jennifer Probst is she writes serious matter but without angst and you always leave her books feeling good about the conclusion. Her writing makes you smile, sigh, feel sad and later hopeful and happy. I definitely recommend this contemporary romance to those who love a good story about family, love and forgiveness. I look forward to book 3.

The story was a good idea but the performance with the characters and the dialogue was very disappointing. it seemed like the author was reaching.

Liked the strong and unique characters

Narrator was great. All 3 books in the series are well done, different enough in characters and conflicts but well integrated. Fairly "spicey " and descriptive at times so be prepared if you don't want that kind of narrative.

Even better than book 1

This book was great!! Loved every minute - the story behind the brothers family and Raven's past intertwined into a fantastic story. Couldn't wait to get to the car to listen to this one and found it was even more interesting than the first! **Spoiler alert.....I had a little trouble with the revenge walk away by Dalton...but a pretty nice recovery!
Also liked Madeline Maby so much better in this book - maybe it was the southern drawl in the first that was hard to take.....
Well spent credit - just purchased book 3!!