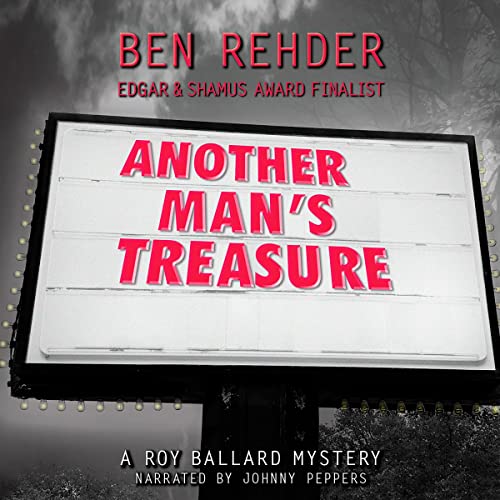 By: Ben Rehder
Narrated by: Johnny Peppers
Try for £0.00

When the manager of a fast-food restaurant is accused of bullying an employee to the point of attempted suicide, Roy Ballard and Mia Madison are hired to document his behavior. As they look deeper, they learn that another employee quit abruptly a few months earlier and hasn’t been seen since. Did she really leave the state, as the manager claims?

Roy and Mia simply want to confirm that she’s okay, but even her family members back home don’t have any answers. Neither does the owner of the restaurant, who has an unexpected connection to the missing woman, or the violent ex-cop, who tries to shut the investigation down. But Roy and Mia won’t stop digging until justice is served.

What listeners say about Another Man's Treasure

I loved the narration Johnny Peppers, perfect for this book.

You will find yourself thinking you know what is going on, a new twist makes you wonder.

Roy Ballard and Mia Madison are hired to check on the behavior of a manager of a restaurant who is s accused of bullying an employee. Another employee quit a few months earlier and hasn’t been seen since. Roy and Mia won’t stop digging until justice is served

Loved the intrigue and suspense

I love how all the little pieces come together bit by bit. Somebody gives a few pieces of info and then Somebody else gives up a little bit more until all the puzzle pieces fit together to complete the story. The twists added depth and kept me raptly listening. For the most part. justice prevailed, but you can't resurrect the dead and give them a second chance. The worst villain got what they deserved in my eyes. This was a great listen and this author can really tell a good story with interesting characters. I voluntarily listened to a free copy of this and am giving an honest review. The narrator did a great job bringing it to life.