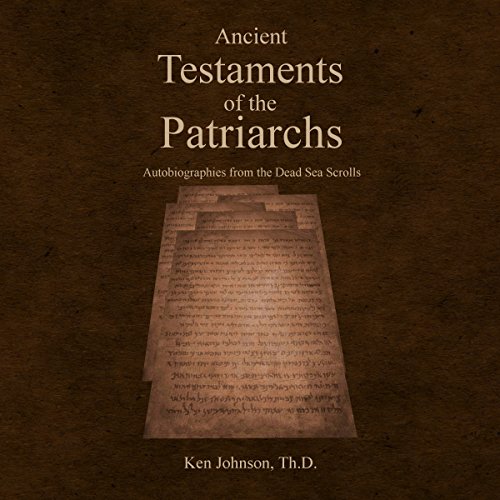 Ancient Testaments of the Patriarchs

Autobiographies from the Dead Sea Scrolls.

The Talmud teaches that the ancient patriarchs were all prophets, and that each one of them left testaments for their descendants to read. These contain commands for their children, moral lessons, and prophecy. This legend is not only repeated among the Essene community, but fragments of 20 such records have been found in the Dead Sea Scrolls!

In this audiobook, you will hear for yourself the testaments of Enos (Adam’s grandson), Enoch, Lamech (Noah’s father), Noah, Abraham, Jacob, Levi, Judah, Naphtali, Joseph, Benjamin, Kohath (son of Levi, and father of Amram), Amram (father of Moses, Aaron, and Miriam), and Aaron. You will see many extra-biblical prophecies of the Messiah, including Aaron’s warning about the Messiah's First Coming. Brought to you by Bible Facts Ministries, biblefacts.org.

What listeners say about Ancient Testaments of the Patriarchs

Not A Good Read

I did not finish this. I looked for a different author on same subject. I'm not sure who was adding their personal opinions to the text but I seen to much written in I know to be personal opinion. Thumbs down

Dr. Ken Johnson and his books are great.

I have about 4-5 of Dr. Ken Johnson Books and 2 Audiobooks. His research and knowledge of the extra biblical books and dead sea scrolls is amazing in tying it together especially in prophecy. Keep up the great work, keep on writing and I also enjoy your YouTube channel.

I appreciate all elements of this book! This is a great associated read for anyone that regularly studies the Bible.

I recommend this book to all students of scripture

I recommend this book to all students of scripture
and biblical history. A chance to ponder ancient writing

True Gems to add to your Crown.

The true interpretation of this word can only be given by the Holy Spirit the living spirit of the Most High God!

Christian need to study the Dead Sea scrolls. Ken Johnson does amazing job, putting together the Dead Sea Scrolls and linking them to the Scriptures in the old and New Testament. Praise the Lord.

Run for your life if u stumble across this audiobook. Just, don’t do it, go work out instead. Is not the content that is terrible, but the style on which is presented.

Important for all believers to hear/read

Wow! What important life lessons and prophecy’s. I don’t understand why we as Messianics/Christians are unwittingly limited to only the Bible. This book is a must read/listen.

I did not enjoy this audiobook at all. I think if you were reading it, the content would be great, but trying to understand Dead Sea scroll fragments without being able to look at the text and study it out is difficult. The other issue is that the narration is terrible. His normal voice is fine, but when he tries to emphasize certain parts of the text, it is awful. For a scholarly book I feel that the narrator should be impartial to the text. It is nice to have a pleasant voice to listen to, but it is not his place to emphasize or deemphasize the text. This narrator uses a few different voices, but they are all annoying.