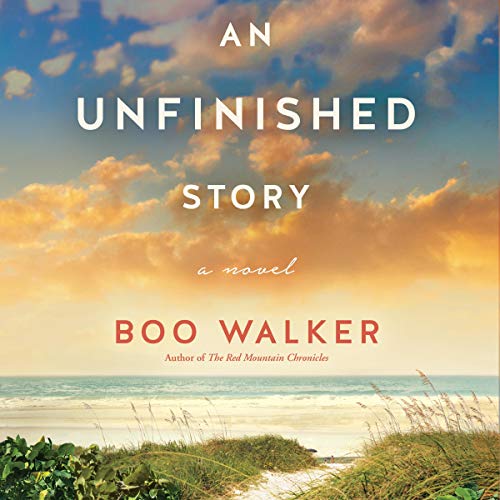 By: Boo Walker
Narrated by: Alexander Cendese,Gabrielle Cendese
Try for £0.00

A grieving widow and a disenchanted writer form an unexpected bond in a novel about second chances and finding the courage to let go of the past.

It’s been three years since Claire Kite lost her husband, David, an aspiring novelist, in a tragic car accident. Claire finally finds the courage to move on; then she discovers among the remnants of her shattered world her husband’s last manuscript. It’s intimate, stirring - and unfinished. An idea comes to her.... What if she can find someone to give David’s novel the ending it deserves?

Whitaker Grant is famous for his one and only bestselling novel - a masterpiece that became a hit film. But after being crippled by the pressure of success and his failed marriage, Whitaker retreated from the public eye in his native St. Petersburg, Florida. Years later, he’s struggling through a deep midlife crisis. Until he receives an intriguing request from a lonely widow. To honor David’s story, Whitaker must understand, heart and soul, the man who wrote it and the woman he left behind.

There’s more to the novel than anyone dreamed. Something personal. Something true. Maybe, in bringing a chapter of David’s life to a close, Claire and Whitaker can find hope for a new beginning.

What listeners say about An Unfinished Story

It’s being read but that’s about all! Sounds like the narrators are speed reading a book that’s boring them. Had to quit at chapter 5.

I think I made it to chapter 5 and had to stop, one of the worst books I’ve tried to listen to in long time:( I DO NOT recommend this book to anyone!!

I loved this book, something bad had to happen for something good to happen, that’s how it works sometimes. My only complaint as with any narrated book, let the female narrate females & the male narrate the males if the narrators can’t do the voices of the opposite sex well. Otherwise, great book, I recommend it, u want be disappointed

The male narrator would be better suited to a Carl Hiasson novel or a satire. He was very mismatched for this character and story. It was a moving and poignant drama and the narrator’s tone was exaggerated, sarcastic and snarky at times. I almost quit the listen a few times. It’s a heartfelt story. I recommend reading it

The story was interesting enough, but the narration was enough to make me put the story down.

One of the greatest stories I've listened to. The author grasp every emotion I had and pulled me in. The story about fostering children warmed my heart. Thank you for sharing your amazing talent.

Loved it, a Must Read!

This was my first book from this author and I am glad I took a chance because I loved the story. It was well written and easy to follow. It hit all the feelings and was uplifting. On top of the story it really made me think about how to make a positive impact in someone's life.

You could tell where it was going from the beginning. I could have been much shorter, it was pretty redundant, first how sad she was, then how list he was, then you knew for the last 3 hours that were going to adopt the boy. Yawn. But it was a good book for the toad I guess - it didn’t require much brain power to follow it.

Boo does it again

Once again Boo Walker hits it out of the park! His dialogue is great and the scene with Whittaker hitting the keys with purpose was hilarious. I sure hope all writers don't go through this.
The characters are wonderful and the journey was well told

Book was really great. Had many different aspects but easy to follow. Highly recommend. I had to finish it before going to bed.

Claire Kite is a successful and professional woman, who owns her own restaurant. Unfortunately she experienced the devastating loss of her husband, and she is struggling to find her way in life again. Whitaker is a novelist fighting writer's block, and finding it impossible to write his second novel. When Claire finds an incomplete novel in her husband's office she is determined to have it finished for him, and Whitaker is the man that she wants to do it. Unfortunately he doesn't think he is the right choice. What follows is a tender story of two people learning to trust, re-finding their passions in life, and eventually opening their hearts to new love. It is a hopeful book with a feel-good ending. This one isn't likely to surprise the reader, but it does give them exactly what they were looking for.