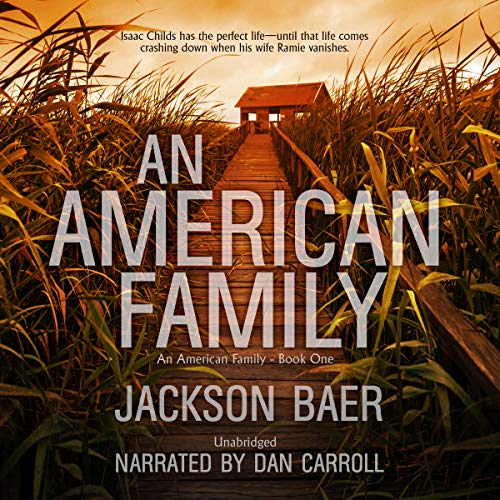 By: Jackson Baer
Narrated by: Dan Carroll
Try for £0.00

Isaac Childs has the perfect life - until that life comes crashing down when his wife Ramie vanishes.

Isaac learns that his wife's disappearance is the ninth in a string of similar cases. In the wake of this news, he struggles to cope, to be a good father to his daughter and college-bound son, and to reclaim something of an ordinary life even as he conceals his troubled past.

After the FBI makes an arrest, and his wife is presumed dead, Isaac begins to move on. Yet will his secrets catch up with him? Has he conquered his vices for good? And what of the FBI's theory that the case isn't completely resolved, after all?

Evolved Publishing presents the first book in the An American Family series, contemporary suspense thrillers that explore one family's trials and tragedies.

What listeners say about An American Family

A very suspenseful story of crime, romance, some heartbreak and some light moments. Enjoyed listening for the whole audiobook.

Overall I enjoyed the story. I don't think the synopsis represents the actual story. it's well constructed and the characters interact well with each other. At times I struggled with the narration as it was a bit sing song for me and some of the womens 'voices' made them come across a quite pathetic when in actual fact they're strong. Not sure if this book has been put in the right category as it's more non fiction than mystery and crime. I did guess how it would end halfway through.

Is she or she not dead..... Hubby struggling coping with dead wife and keeping children and life .

This book was about a family that had the mother vanish and the father so locked up with his own issues that he could barely function. The premise was decent but the execution lacked a little.

The narration was OK but not stellar.

This book was provided free of charge in expectation of an honest review.

What a story!I enjoyed listening to this ,non stop,for the most part.Some of the things the family did were unbelievable,but it IS a book.I liked the storyline and can't wait to get to the next book.That being said,I found the narration by Dan Carroll to be cringeworthy for the female voices,to good for the male.A lot of the narration seemed dry to me.I was given this book by the narrator,author or publisher free for an honest review.

The Childs family- the picture perfect American family. Isaac met Ramie in high-school and were married with kids by the time they were in their early 20s. Life treated them well with a loving home, good jobs and smart children.

When Ramie doesn't return from her run one evening Isaac's whole worlds gets turned upside down. The secrets and lies slowly start to catch up with him. Was their marriage as solid as everyone thought?

I personally couldn't connect with Isaac in this book - didn't agree with a lot of his actions and generally just did not warm to his character.

Unfortunately the narrators voice didn't do this particular story much justice either. Having said that the actual plot carried itself pretty nicely. The story had a solid build up and although I thought it at times non-believable I enjoyed the majority of it. The investigation provided much needed suspense and the book covered a range of different subjects from murder and grief to life after and sexuality.

The ending wasn't much a shocker as I had half expected it. Nonetheless it did leave a fair amount of loose ends to be tied up in the sequel, so I am interested to see where the story takes me. Watch this space!

3.5 out of 5 stars, a solid effort
I accepted the audio version from the author in exchange for an honest review.

I absolutely loved this one. It has all the feels. Isaac had it all then tragedy strikes. This is a story about dealing with life changing events and learning to cope with the outcome. I really loved this book and look forward to the next one.

I loved the story and how the characters had real life flaws. They was relatable to modern day issues in families. The ending left me wanting to know how the delimma is going to be resoved. The only downside was the narrator didn't fit the story. He was great with the mens voices but the womens voices all sounded too similar for my tastes and the narrative part had more of a bedtime story quality. Aside from that this was an excellent book.

this was very interesting.. some spots was creepy.. and the narrator did an amazing job with that haha. the story was very seat of your pants gripping type of story.. very well written. the narrator captured the feelings of the story and the characters very well . i liked this a lot

Great read, narration, not so much

My first read from author Jackson Baer & the first book in An American Family Series was well-written & enjoyable, a tale continuously developing over the entire length of the book. I was given an Audible copy of this book & I’m voluntarily reviewing it. I was unimpressed with the vocals of the narrator, in fact, I’d recommend reading the book & not listening to this narrator it was so bad. It looks to be the beginning of an enjoyable series that I look forward to reading. (RIP Marley January 20, 2014 - July 24, 2018).

This was my first Jackson Baer's book. This is a good and gripping contemporary suspense and dramatic thriller. The story is well written. The characters and their relationships are well described. The story is filled with twists and turns. The FBI investigation is captivating. The ending is surprising and I would like to know what happens next. The narration is good. The narrator has a great male voice, but his female voice isn't my favorite. I received this free review copy audiobook at my request and I have voluntarily left this review.

What Would You Do?

The author did a great job establishing the characters and the character relationships. Not only do they seem like real people, but they struggle with the same 'demons' that a great many people struggle with such as infidelity, temptation, addiction, abuse, and more. At the same time, these characters also experience some of the genuinely best parts of life such as following their dreams, love, new beginnings, success, etc. One of the best aspects of this book is the author's ability to weave in this element of honesty of the reality real people encounter in their daily lives.

This isn't your typical abduction story. This isn't the typical 'person is abducted and then killed' or 'person is abducted but is saved and everyone lives happily ever after', it is so much more. However, there are periods throughout the book where I would start to forget that this was supposed to be a 'contemporary suspense thriller'. These periods are still intriguing, but the details do start to seem irrelevant to the overall story if you don't know that there is a 2nd book. Since there is a 2nd book, there is some stage setting going on that will likely make more sense later on and character interaction that will likely come to fruition. One very important question we are left to consider: what would you do if you were Isaac?

I think the narrator really did a great job with this performance, on a general level. He was consistent, clear, and he differentiated the character voices very well. I think he could have done exaggerated some emotions throughout the performance to add an extra layer of intensity to the story. As a narrator, he did great; however, I'm not wholly convinced that his actual voice was the best voice choice for this particular story. Regardless, he absolutely must narrate the next book. There is nothing worse than a narrator change in the midst of a series.

I received a review copy at my request and have voluntarily left this unbiased review.

This book is completely different than any other I've ever read. The characters are flawed and sometimes tough to root for.

I hate it when books have these perfect characters who are nothing like people in real life. An American Family offers mystery, suspense, drama, love, and hope for redemption.

I will 100% be reading the next book. I also enjoyed the narrator. His voice is soothing, and while the female characters need some work, I simply loved this book. I'm literally waiting for book two to come out.

Great story, not so great narration

I wasn’t sure if I was going to be able to get through this book because of the narration. I did eventually get used to the way he delivered the voices. The story kept my attention. Even though I guessed what was going to happen, I enjoyed hearing it unfold. I was given this book in exchange for my honest review. Once you get used to the narrator, I think you will enjoy it.

Omg!! This is full of twist and turns. At times , I wanted to smack Isaac for some if his actions, but he seems like he's straightening up his life. The way this ended us shocking for all involved. I think some people have inappropriate expectations after two years have passed. Looking forward to the next book. I voluntarily listened to a free copy of this and am giving an honest review. The narrator did a great job bringing it to life.

great story just don't care for the narrator. I'm very picky when it comes to narrators.