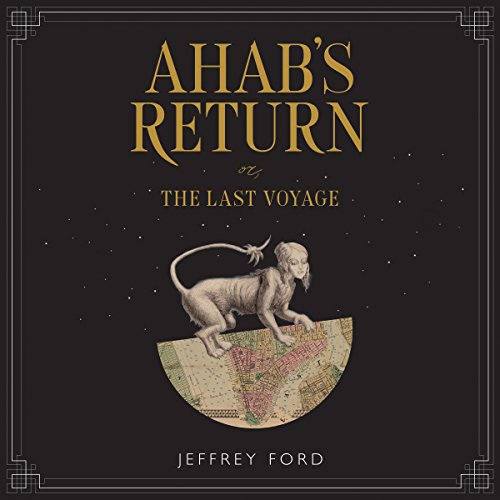 By: Jeffrey Ford
Narrated by: Charles Constant
Try for £0.00

A bold and intriguing fabulist novel that reimagines two of the most legendary characters in American literature - Captain Ahab and Ishmael of Herman Melville’s Moby-Dick - from the critically acclaimed Edgar and World Fantasy award-winning author of The Girl in the Glass and The Shadow Year.

At the end of a long journey, Captain Ahab returns to the mainland to confront the true author of the novel Moby-Dick, his former shipmate, Ishmael. For Ahab was not pulled into the ocean’s depths by a harpoon line, and the greatly exaggerated rumors of his untimely death have caused him grievous harm - after hearing about Ahab’s demise, his wife and child left Nantucket for New York, and now Ahab is on a desperate quest to find them.

Ahab’s pursuit leads him to The Gorgon’s Mirror, the sensationalist tabloid newspaper that employed Ishmael as a copy editor while he wrote the harrowing story of the ill-fated Pequod. In the penny press’s office, Ahab meets George Harrow, who makes a deal with the captain: the newspaperman will help Ahab navigate the city in exchange for the exclusive story of his salvation from the mouth of the great white whale. But their investigation - like Ahab’s own story - will take unexpected, dangerous, and ultimately tragic turns.

Told with wisdom, suspense, a modicum of dry humor and horror, and a vigorous stretching of the truth, Ahab’s Return charts an inventive and intriguing voyage involving one of the most memorable characters in classic literature, and pays homage to one of the greatest novels ever written.

What listeners say about Ahab's Return

Crass imagery--farts, "turd of the sea." Too much reliance on the reader's knowledge of old New York streets and city layout.
Interesting information about John Jacob Astor.