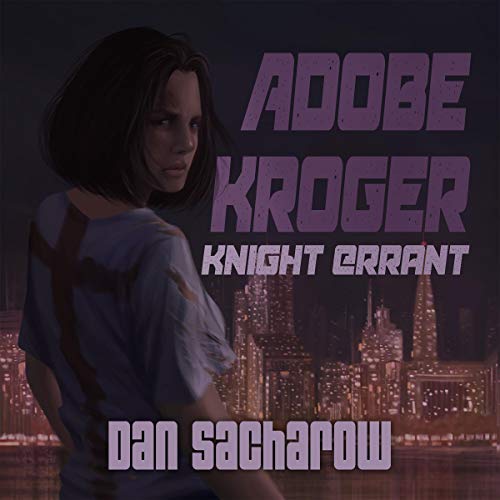 By: Dan Sacharow
Narrated by: Addison Peacock
Try for £0.00

Adobe Kroger has a secret.

She is a Paladin - a holy knight blessed with the power to wield the divine Light of love and creation. Or she was, anyhow. After being convicted of blasphemy, she’s been excommunicated from the holy order and her power was taken away. Or so her superiors thought. Unbeknownst to them, despite their efforts, the Light is still hers to command. She would be in terrible danger if they were to discover the truth, but she is determined to use her power to rectify a terrible mistake, whatever the personal cost.

When one night she encounters a mysterious evil creature the likes of which no Paladin or Wizard has ever seen, she becomes embroiled in a sinister conspiracy that holds the fate of the world in the balance. As if that weren’t enough, she also loses her phone.

This modern-day fantasy tale is told in Adobe’s own voice. Join the potty-mouthed Paladin as she confronts the terrors of an obnoxious speech impediment, an embarrassing viral video, a far more talented and handsome rival, a phantasmal dream-walking roommate, and a wizard armed with a cricket bat and a faulty memory. With all of that and being caught between her day job and former colleagues with murderous grudges, can she come to terms with her destiny in time to avert the destruction of the human race?

Adobe Kroger, Knight Errant is the first in a new series by Dan Sacharow, creator of the webcomic Molly Beans. Set in the recent past of 2013, this urban fantasy adventure story can best be described as John McClane meets Black Widow set in an episode of Jack Bauer’s 24, with a skilled, moderately-powered protagonist swept up in a nonstop barrage of calamity, with little to rely on but her fists and her wits.

A memorable experience from start to end

As my first audio book I was very pleasantly surprised. The story is well paced, the characters range from sympathetic to down right loathsome and I never felt like I wa being left behind by exposition. Themes and concepts were explained well enough without too much over explanation But the cherry on top is the voice work done by Addison Peacock. Soothing and her range is great. I honestly cannot wait for the next installment. A brilliant way to spend a boring commute to work and back each day

Excellent new addition to the Urban Fantasy / Paranormal genre. The main character is believable to the point I swear I probably worked with her in the past. Additionally it has a workable magic system without bogging the reader down in mechanics or glossing over everything with a wave of the wand a miracles happen.

The voice of the narrator, Addison Peacock, worked great for all of the characters. I was impressed with her pronunciation of the German invocations.

I really enjoyed this book! It is the audible equivalent of a page-turner! The main character is very relatable and interesting, and the detailed descriptions help the characters and the scenes come to life. The story was very well crafted with many turns and surprises as the pieces of the story come together.
Great narration as well. Can’t wait for book 2!

What I learned from this book.

So for starters, Adobe's story was basically an inverse on the "chosen one" story in that instead of being prophesied Adobe basically lucks into her position of being the key to the dybbukim's return by holding onto the Light as an act of defiance against the Paladins and thus inadvertently dooming the world. From there on out, it's one coincidence after another that forces Adobe to think up solutions on the fly and you really get the sense of just how in over her head she is. Adobe is flawed but still sympathetic and I thought her stuttering added an extra layer of authenticity to her character. It has all the makings of a modern noir with how Adobe is taken along from one scene to the next and has to piece everything at the last minute. This book for me was a how-to guide when it came to writing coincidences as a critical part of the narrative because Adobe is just as bewildered as the reader and we learn along with her.
Do not pass this book up.

I really enjoyed the story and Adobe was a very thorough character. My only beef with any of it was the clickbaity way she talked.

Phenomenal story with a phenomenal narrator! A new and original take on the unlikely hero. Adobe is a badass and the narrator brings her to life.