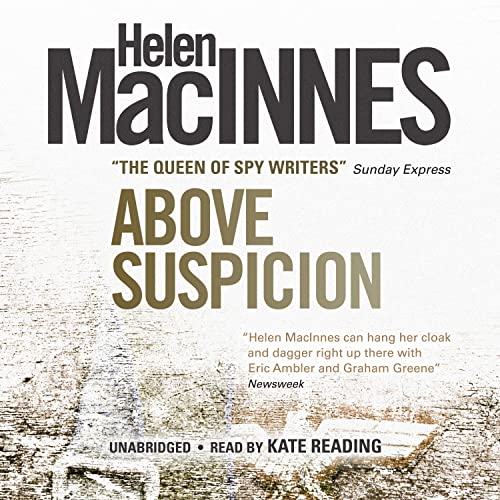 By: Helen MacInnes
Narrated by: Kate Reading
Try for £0.00

Richard and Frances Myles are preparing for their annual European summer vacation in 1939 when they are visited at their Oxford college by old friend Peter Galt, who has a seemingly simple job for them. But in the heightened atmosphere of prewar Europe, nobody is above suspicion. In fact, the husband and wife are being carefully monitored by shadowy figures.

Above Suspicion was MacInnes’ breakthrough book, a best seller published in 1941 and released as a movie in 1943, directed by Richard Thorpe and starring Joan Crawford and Fred MacMurray.

What listeners say about Above Suspicion

I love Helen Macinnes books and it's great to see Audible releasing several of them this year. Her style of writing may be a little old fashioned now but the stories are great and full of intrigue but mercifully without the gory detail so common in modern thrillers.
Here a young couple are drawn into espionage just as World War 11 is starting and Macinnes paints a chilling picture of France, Germany and Austria as they follow a chain of clues to find a missing agent.

A disappointment after Assignment in Brittany

Some words come to mind: naive, innocent, wordy, sentimental. A bit too Left Book Clubbish as well: Germans are mainly evil Teutons and square heads. The Oxbridge types are brave, principled and true (huzzah, huzzah!). It’s as if P G Wodehouse had been asked to write a serious thriller- it doesn’t really work. But then if Wodehouse had written it, he would have made Honoria Glossop the main protagonist and she would have sorted things out in the first 50 pages…

Dated but a good story

I agree with the previous reviewer but, having come out of the womb in 1947 as a fully fledged womens libber pre the 1960s, I wanted to shake the female protagonist whenever she played the little woman. The narration wasn’t bad apart from mispronouncing Magdalen College and it suited the the novel. I read most if not all of Helen MacInnes’s books in the 1960s and was pleased they had been reissued in audiobook form. Sadly, like Mary Stewart’s novels, they are dated and tend to make one wince on occasion but it’s good to travel back in time and as R Griffiths wrote it makes a refreshing change to be spared a lot of bad language and cringeworthy violence.

Suspenseful and exciting, but not for everyone

I was thrilled to see Helen MacInnes books coming to Audible. I enjoyed reading most of her books 30 or so years ago. Helen MacInnes wrote Above Suspicion in 1941. Many books from that era do not do well with modern audiences. It's almost like watching old classic movies, you cringe a little, but if the movie is good, you want to watch it again and again. I am delighted to "be dragged across Europe" hiding in plain sight from enemies, in the typical Helen MacInnes way! The story goes at a slower pace than most modern spy novels, but I loved it. Some days I am in the mood for a fast paced thrill ride. This is not that. Fans of MacInnes will love this. Looking forward to other titles as they become available, especially some old favorites.

SO happy to see these books coming out!

Helen MacInnes was my first mystery author. My mom felt her books were acceptable for a 12-year-old, but we talked about it after each book. I hope they're going to release the entire set, I just love these books. The narrator was excellent. She had a number of characters to speak for and I very much appreciated that, even though the main characters were English-born, she didn't give them accents too strong for American ears to understand. Ditto for the German characters. I've had books where they stayed true to the character being English (or Irish, or German, etc.) and used accents too strong to easily understand. This disrupts the flow of the story if you have to stop and try to piece together what you just heard. Very enjoyable and I've already gotten the second book, and am looking forward to the rest as they come out. Thank you.