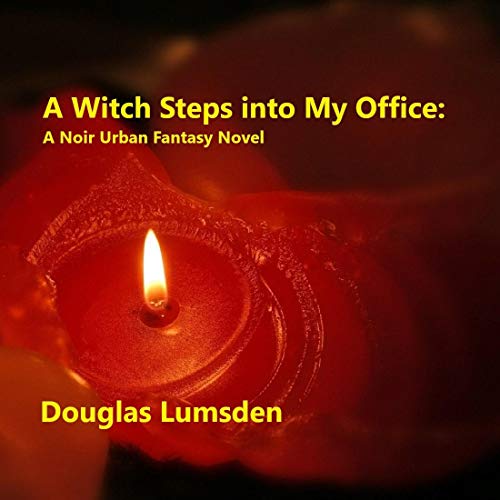 A Witch Steps into My Office

Alex Southerland is back, along with Smokey and Badass. Our hardboiled private dick and elementalist is searching the mean streets of the city for the secret behind a deadly curse. It all starts during a rare Yerba City heat wave when a witch with strange snake tats winding up her gams walks into his office to report that she has committed a murder. Thing is, the murdered man isn't dead, and, well, it's complicated.

Crawford the were-rat is back, chewing his way through the walls of a secret elite gentleman's club to help Southerland expose a sex-trafficking ring. Meanwhile, Southerland has to deal with a were-crow, a shadowy dog spirit with no eyes, a couple of rock-addled were-snakes, a witch who knits tea cozies, and another witch who wants to feed Southerland's heart to a hummingbird. And that's before he's cursed and cast off to spend eternity in the Azteca realm of the dead! And he'll still have to survive the aftermath of a deadly battle between two very old and very powerful naked ladies if he wants to bring some Huaxian takeout to the Lubanks. Like I said - it's complicated!

What listeners say about A Witch Steps into My Office

I liked this even more than the previous book in the series. The case of Alexander Southerland takes us into a world of whiches, magic and police corruption. The book was fun and exciting and it was har to put down. The narrator is amazing tells the story in a great way that really enhanced the characters. Giving my warmest recommendation!

Enjoyable light fantasy story that should be read after A Troll Walks Into A Bar the first of what I hope will be long series of books. A clever take on the urban fantasy detective novels, I enjoyed both books from start to finish .

This is my second book in the Alexander Southerland PI series. It was just as good as the first one. Already downloaded the third book and will start listening to it as soon as I finish this review. If you like urban fantasy or detective noir do not hesitate to get this book.

Seriously. Give the Alexander Southerland P.I. Series a try!

This is the second book in the series. love the character development and the protagonist monologs/the inside voice the author uses. I love the first book better, more choice of voices. The acting is tiny bit better here I think. this one is slowly building then things move fast in the four last chapters. Personally i didn't like the subject mater in this story that much, but i was captivated nonetheless because I love the first book and the characters.

I read this series out of orders-

Decent crime noir paranormal action, that’s what I’m here for. Reading [listening] to the books out of order, I’d have to say that it’s a good start but unpolished. The female characters were annoying, very annoying, primarily in the voice acting but their character development was weak. Main character was enjoyable and fun to follow, solid noir, keep devolving.

Voice acting was good, 2-3 times the actor hit the mike or had background noise. Female characters, again, could use some work to sound less “bitchy”.

Another good entry in the series. This story felt like it had a better detective narrative than the first. The narrator did another great job.

This book was a very fun read!

I like this author and narrartor combo a lot ! This author is interesting in the way he weaves parts of Aztec culture into the fantasy, what makes it extra fun is the very talented narrartor, he has many voices that absolutly bring the charaters to life ! It held my interest all the way through, with lots of twists & turns.
I definatly recommend.

When a Witch Needs a P.I.

When one stumbles across a good book, one tends to want more and this is the case with book 2 of Douglas Lumsden’s (Alexander Southerland, P.I. series) A Witch Steps into My Office.  I thoroughly enjoyed this book as well.   Alexander is joined once again with Badass, Smoky, and Crawford in this wild adventure with witchcraft and magic.  Alexander is facing an unknown entity who is pulling all the strings. Curses and some weird-looking entities stalking him make this book dark yet highly entertaining.

Its title is catchy and the world-building, as well as the dialog, is rich and vivid.   Each character is well developed and adds to the flow of the story well.  Lumsden is a masterful storyteller with a rich imagination.  He takes the Noir genre to a new level!

The narrator, Duffy Weber, excels in his performance.  He slips each character on making the story even more engaging.  His voice has the noir quality that enriches the story perfectly.  His cadence is smooth and flows.

I thoroughly enjoyed this book 2 in this series and hope for another one sooner than later!

There were no issues with the quality or production of this audiobook.  It was clear and crisp.

Disclaimer: This Audiobook was provided free of charge by the author, narrator, and/or publisher in exchange for a non-bias, honest review.