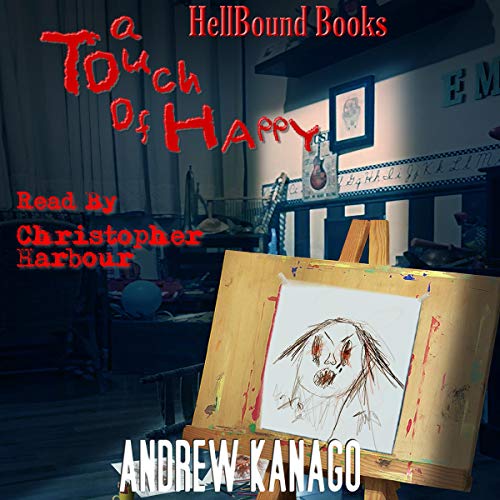 A Touch of Happy

By: Andrew Kanago
Narrated by: Christopher Harbour
Try for £0.00

Mark Peter - middle-aged, soft belly, weed wacker haircut - likes the quiet life. Any day spent indoors eating frozen pizzas, painting RPG figures in the basement, and feeding his scruffy cat is a good day. The problem is the outside world.

When Mark touches certain things, he draws. Sometimes, it’s a little boy lost in the woods and sometimes, a throw pillow held tight against a grandmother’s face as she scratches at gloved hands. The FBI likes to call on Mark to help find missing people. Sometimes, they’re even found alive.

Then, a body is found in a neighboring town, and the FBI thinks it is the work of a murderer long thought dead. Mark refuses to help, and more bodies are found. The killer gets in contact with the quiet, middle-aged man with a weed wacker haircut. If that isn’t enough, Mark may have found his soulmate.

What listeners say about A Touch of Happy

loved those voices. plot twist are good. easy listening.check it out it is good the end

I would have given it a 5 star but that ending came out of nowhere and wasn't explained very well. The conclusion of the story seemed rushed. Such a pity too because the story was great.