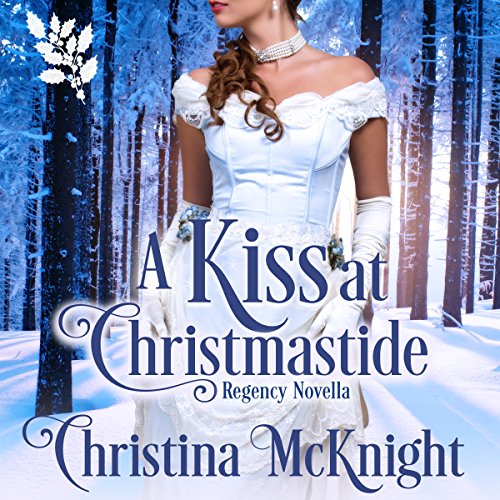 A Kiss at Christmastide

By: Christina McKnight
Narrated by: Anne Marie Damman
Try for £0.00

Lady Pippa Godfrey has suffered the most ruinous London Season. She escapes to her Somerset estate for a quiet Christmastide holiday with her family, away from society's prying eyes. But before her parents can join her, a storm crashes down on Somerset to destroy any hope of Pippa's white Christmas dream. The roads have flooded and travel is impossible, leaving her stranded and alone. But a muddied, angry, and devilishly handsome lord appears at her door demanding shelter.

Lucas Hartfeld, the Earl of Maddox, has been summoned by his parents, the Marquis and Marchioness of Bowmont, to attend a holiday party in the wilds of the country, far from his London townhouse. He suspects they command his attendance for far different reasons than a simple country party. When a storm strands his carriage, he's forced to seek shelter at the only home for miles around, a local manor called Helton House.

When Lady Pippa is reluctant to admit him, he does what he's been raised to do - demand she provide him and his servants with shelter until the storm passes. But the beautiful woman draws his interest far more than he's willing to admit. Can Lucas find a way out of the predicament his parents are planning?

As Lady Pippa scrutinizes another arrogant, demanding lord, she is bombarded with memories of betrayals in her past. Can she forget those difficult life lessons to claim a Christmastide kiss from a perfect stranger?

What listeners say about A Kiss at Christmastide

Would you try another book from Christina McKnight and/or Anne Marie Damman?

Has A Kiss at Christmastide turned you off from other books in this genre?

This book is poorly written and entirely unbelievable. The hero's backstory feels forced upon the reader and he goes from being a rake and a rogue to a wounded hero character. Lady Pippa is so unreal it became funny to me. She is childish and churlish, then a prim lady of good virtue then willing to throw it down on the hero. The author is incapable of making the main characters act in a consistent manner. This book is all over the road. There are no explicit sex scenes in this book, just some kissing.

I’m going to tell you about the narrator first: She SUCKED. You’d have to be told who was talking because Lucas sounded just like a woman. WTH are narrators thinking when they don’t even try to make the men sound manly. Don’t these newer narrators listen to any of the better female narrators to hear how they lower their voices to sound like men, even a little bit? Here’s a hint Anne Marie Damman, try listening to Katherine Kellgren or Ashford McNab or Tanya Eby, or Mary Jane Wells or Kirsten Potter or Kate Rudd, or any number of female narrators who can do men’s voices. Even if the men all sound alike at least they sound like men. And Pippa sounded like a squeaky teenager; it was like nails on a chalkboard. I’m so tired of buying a book and having the men sound just like women and the women sounding like immature idiots. I would have to pass on ever listening to this narrator again, and probably this author too.

That being said, this wasn’t a very good novella and the narration just made it worse. And it did leave one important question unanswered: If Pippa and Natalie were friends since they were children why did Natalie say what she did, in front of all those people, ruining Pippa’s reputation and sending her off to the country for a year? I didn’t understand that and the author never told you why Natalie did it.

I did like Lucas and Pippa but even in a novella it’s really kind of quick to fall in love in 2 days. Just sayin’

There was no sex and no swearing in this story.

Simple, sweet. Squeaky sweet narrative voice for the heroine. I felt like I was hearing a quickly abrieviated idea of a story.... with huge holes and more questions then answers.

Creditworthy? Not in my opinion.

Loved listening to the accented telling of this sweet romance! I could almost feel like I was in this era & doomed to be matched by their parents.

A relatively short Christmas-themed novella with a sweet ending that tries its hardest to make you forget its shortcomings: major instalove, two Dukedoms withing walking distance (fifteen-minute walking distance! They share a village???), a BFF who turns on the main character without warning yet unexpectedly seems to want her to be happy at the end, emotional reactions that seem off but are also quick to change (the aforementioned BFF isn't the only one), miracle reunions with estranged parents (apparently--we don't actually see this because it seems to happen between the main story and the epilogue)...

I did like the idea of the Christmas legend (the kissing bough) though Pippa couldn't seem to decide for once and for all if the story meant she was to marry the one who kissed her or not...it seemed to depend on her current mood and state of mind.

Probably a lot of the above could have been fixed with a longer story that 1) took place over a longer period of time 2) explained more about character motivations (what were Natalie, the traitor BFF's reasons for what she did to Pippa? What were her and Lucas's fathers' big "evil" plans for the village?), and 3) stayed a bit more true to the historical period.

The audio version is nicely done; the narrator's breathy English-accented voice gives life to both Pippa and Lucas's characters.

I received a complimentary copy in exchange for an honest review.

What did you love best about A Kiss at Christmastide?

There is an added sweetness that magnifies the heartache and captivating romance of Pippa.

What other book might you compare A Kiss at Christmastide to and why?

To Catch a Spinster by Megan Bryce. Like A Kiss at Christmastide, reputation and social class play a part within the love story and strength of character make for deeply enchanting stories.

Which character – as performed by Anne Marie Damman – was your favorite?

Pippa. Within her dialogue presentation, Ms. Damman turned Pippa from betrayed victim to survivor. Like an antique landscape come to life, the delivery add essence to an already magical romance.

An open heart can lead to rich blessings.