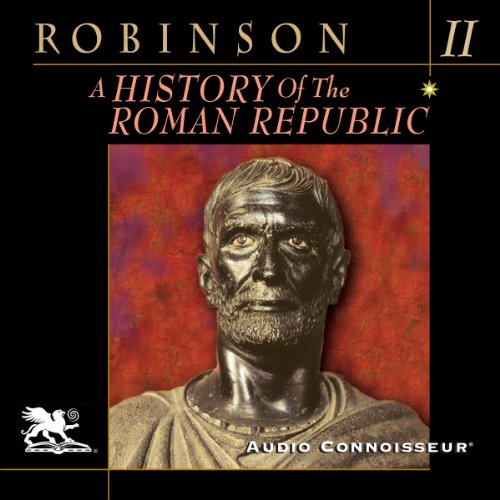 A History of the Roman Republic, Volume 2

By: Cyril Robinson
Narrated by: Charlton Griffin
Try for £0.00

By the middle of the second century B.C., the Roman Republic has been changed completely from the sober and virtuous character of the previous generations of self-sacrificing soldier-farmers. Rome has become a wealthy, diverse metropolis of many conflicting interests. The influence of Hellenism, while on the whole beneficial to the educated caste, has proved ruinous to the morals of the man on the street, who has joined an insatiable mob. But a greedy and power hungry faction of wealthy capitalists and nobles begin to use the Roman mob to promote their own selfish interests. Meanwhile, the immense expansion of Roman territory to include the entire Mediterranean has brought into being a complex bureaucratic apparatus which the fractious Senate is incapable of running. Bribery, graft, and wholesale theft by unscrupulous governors provokes armed rebellion in many provinces. At Rome, the mob has become accustomed to an expensive welfare system which threatens the state's financial powers.

Into this dreadful state of affairs steps one of history's bravest reformers, Tiberius Gracchus. Along with his brother, Caius, these two will introduce, beginning in 133 B.C., a series of political and economic reforms which unleashes over a hundred years of massive civil unrest and devastating civil war. The chaos is finally brought to an end with the accession to power of Octavian in 30 B.C., and with him comes an Imperial tyranny that spells the end of an ancient form of government known as the Roman Republic. Enjoy Cyril Robinson's superbly written historical masterpiece, a crowning achievement by the greatest historian of the 20th century.

This is Volume 2 of Cyril Robinson's A History of the Roman Republic. Have you listened to Volume 1 yet?
(P)2005 Audio Connoisseur
Ancient History
Show More Show Less

What listeners say about A History of the Roman Republic, Volume 2

I truly enjoy an audio tour of history. However, this book was incredibly boring and not engaging. To make matters worse, the narration was just horrible. By far the worst I've listened to in the past 12 months. Still searching for an engaging telling of the rise and fall of Rome.

The deep beginnings of the Republic begin here

What did you love best about A History of the Roman Republic, Volume 2?

As part of my catching-up on history, I decided to listen to books on ... well.. history.

I have long been wanting to read/listen to the classic Decline and Fall books, but thought I better start with something closer to the beginning - which I am glad that I did.

This book is a great introduction to the formation of the Roman Republic and proved a very interesting listen. At some points it required a rewind - as the names of people and places can become slightly overwhelming in an audio format, but that was hardly a problem.

All - it is a historical recount