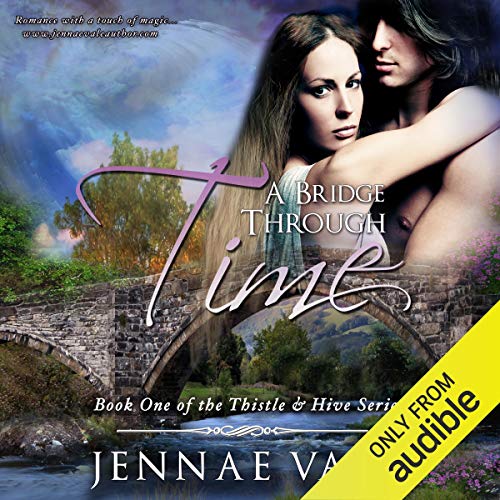 A Bridge Through Time

By: Jennae Vale
Narrated by: Paul Woodson
Try for £0.00

Ashley Moore's life in San Francisco has hit a few snags, not the least of which involves sightings of a mystery man around every corner. Is she losing her mind or does he really exist? Her search for this grey-eyed stranger leads her to Scotland. There she meets a witch with a secret, a vindictive English knight who is bent on revenge, and she crosses a fog-shrouded bridge into the arms of a 16th century Highlander.

Cailin MacBayne is no stranger to beautiful women, but has always managed to stay one step ahead of commitment. That all comes to an end when he meets Ashley. He doesn't care where this beautiful, yet unusual lass came from, he's just happy to have found her.

Ashley cannot resist the handsome Scot and finds herself falling hopelessly in love. In the process, a secret is revealed, a battle is waged and Ashley must ultimately decide whether to return to her own time or give up her 21st century life to stay with the love she has found in the past.

What listeners say about A Bridge Through Time

A Bridge Through Time

This is a fantastic series of books in book form and as a Audiobook. The narrator dose a good job and you can visualise the story seen as the story unfolds.

Enjoyable First Book of the Series

This is the first book I've read by Jennae Vale so I didn't know what to expect. I have to admit, when I think of a time travel romance I think of a detailed story that is seeped in history and adventure. This book, however, was a little predictable, low on history but surprisingly is still really quite enjoyable. It is a good beginning to what I hope will be a great time travel series.

This was a fun story that was set in modern day and 16th Century Scotland. The main characters, Ashley and Cailin, are both very likable, interesting and their romance was sweet and transcends time. The ending came too soon however so I am happy there will be more books to come.

If you go into this book knowing it's more of a fun time travel romance rather than a deep time travel adventure I think you will enjoy this story even more. I'm looking forward to the next book.

Humorous & Scary When Past Meets Present

Let’s face it. If I could time travel I would. The adventurous spirit of my inner-self thrives on the excitement of getting into a tight situation and being able to squeeze out of it. It was great fun following Ashley Moore on her escapade to Scotland and yes, beyond, to its past.

I appreciate Paul Woodson’s narration style, particularly when there’s a brogue in the mix. Jennae Vale is a new author to me, and since I love reading about Scots, the Highlands, etc. it was natural to give this book a listen.

When the present and the past bump heads, I’m always intrigued. Ashley was your typical American girl except for this dream which just wouldn’t leave her. Deciding to take a trip to Scotland (nudged by destiny’s hand and the magic of a woman who ‘sees’ more than most) she is looking for the mysterious man who won’t leave her dreams.

She finally arrives at the Thistle and Hive inn which is run by two charming people. Her life begins anew when she crosses a bridge when hiking close to the inn. She runs from creepy Teddy on one side of the bridge, she thinks is out to hurt her, only to run into someone who definitely IS, on the other side.

The author builds tension as Ashley experiences buzzing and tingling and gray-eyes becomes more insistent in her dreams, urging her to hurry. So by the time she runs over the bridge I was more than ready to experience her adventure. And what an adventure it turned out to be!

Cailin MacBayne, the hero, is a male any woman would love to have dote on her. Ashley needed such a man in her life, but not all was easy when she ran across the bridge and entered the swirling fog. Plenty of action and danger awaited Ashley. I enjoyed the humor and comradery and warmth of the Mackenzie clan. It was comical seeing Cailin's reaction to Ashley’s American speech and slang.

All in all, I enjoyed much the presentation of A Bridge Through Time. Would that the town of Glendaloch really exist bringing past and present together!

Not bad but not great...

This is the first book I've listened to by Ms Vale. The story was decent but predictable and simple. The narration is what I just couldn't get used to. He did the accents fine and did the male voices well but made the main character sound like a whiny bi***.

I'm sure the author did not intend this. I actually stopped listening to the book several times because of the narration. Between the poorly done female characters and the added drama where there shouldn't be any... It just kept bringing me out of the story and thinking ugh... This may be a decent book if it had been narrated by someone else. By then again, maybe not.

This title isn't awful, and may be worth a credit for you but if the next book in the series (which I already purchased unfortunately) doesn't improve, this will be my final read by this author and definitely by this narrator.

I don't even know where to begin to review this book. I had a really hard time finishing it. if it hadn't been on audible I wouldn't have wasted my time but since I was doing other things while listening I stayed with it till the end thinking it would get better but it didn't. the story itself was ok and not horrible but I thought the writing was not great and was very cheesy and made me cringe a lot. I did not like the narrator at all. I thought he was too melodramatic and the voices he tried to do for the female characters were pretty bad especially the character of Edna which ended up sounding like Robin Williams' Mrs Doubtfire character to me. I'm going to try to figure out how to return this and get my audible credit back.

I have not liked any romance books narrated by a man. Men, and in particular this narrator, cannot master a decent romantic woman's voice. They all sound like childish, overly excited immature girls. I hate it. And this story was overly simple, for teenage girls not mature women. There was no emotional trauma or deep conflict to over come. I was quite bored. I could have enjoyed it better, however, if the main character's voice had been better.

What a wonderful surprise this book turned out to be. l love finding a new author who brings the magic of story telling to life. This is a tale of romance, time travel, legend, a little magic and a hefty dose of all things Medieval Scotland. The plot sings it's magic as it twists and winds it way through the centuries. The characters are colorful with well honed personalities. Although typical in many ways ( Hunky highlanders, headstrong lass, castles, warhorses, etc...) it is also unique in just as many ways. Other than one interruption this was one of those books that scream at you that you HAVE to finish it Now, and you verrry happily oblique.

NARRATOR: Paul Woodson is flawless. As usual he delivered a stellar performance.

Not worth the credit

I'm all for sexy scotts but this one was juvenile. It had such promise but the characters are not well developed and the story too simple. Did not manage to finish it.

A delightful time travel romance with a few twists that were quite interesting. Ms. Vale is a new author for me and I am looking forward to more after listening to this story.
Loved Ashley even though at the beginning she seemed a bit weak, but when faced with the unknown and dangerous situations she rises to the occasion, showing spunk and strength. And Caillin ... what is not to love? Strong, fierce, loyal warrior, no wonder Ashley fell in love with him. I would give up chocolate too :D Their journey to HEA is not easy, but all the more satisfiying. Love the chapter where Caillin has a glimpse of the 21st century, I was grinning along with Ashley.
I love the idea of having a Bridge Guardian, Edna is quite a character and finding out about her daughter and husband was quite a surprise.
Listening to one of my fave narrators, Mr. Woodson made this audio even more delightful. His accents and various voices for the many characters are always a pleasure to listen to, especially his Scottish brogue.

A bridge through Time

This book is another 'Outlander Lite' story.We meet a young woman who is seeing a man,then he disapears.She finally follows him from America to Scotland.There she rents a room and is taken under the wing of the kindly inn keepers wife.When she goes on a picnic,everything she could ever need is packed with her by the kind woman,as if she knows what the outcome will be.It is a fun story and a good read.
Paul Woodson narrates this beautifully.He does both men and womens voices flawlessly.
"I was provided this audiobook at no charge by the author, publisher and/or narrator in exchange for an unbiased review via AudiobookBlast or MalarHouse dot com"

The book had romance, action, sexy Highland Scots, and also a good narrator. Can't wait for book 2 & 3. This book brought me out of the dumps and made smile again.