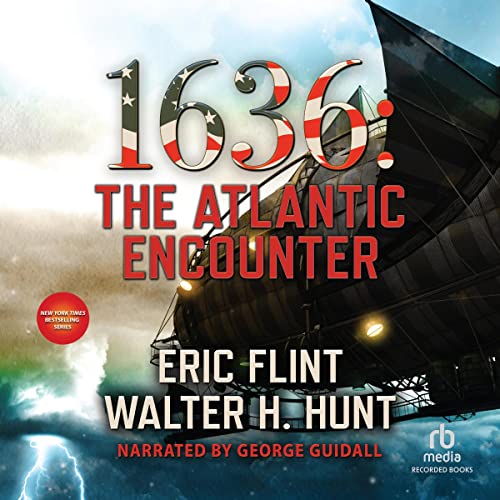 THE BEST-SELLING RING OF FIRE SERIES CONQUERS THE NEW WORLD!

It has taken almost five years for the United States of Europe to stabilize its position in 17th-century Europe. Now it turns its attention to the New World, where the English have ceded their colonial claims to France. There are vast lands and rich resources across the Atlantic for any nations powerful enough to rule and control them—and equal incentive for other nations to block their path.

The time-displaced Americans know about the future path that led to their own United States in North America, in the other universe they came from. But do they want to repeat that history as it was? Yes, they had democracy—but they are helping to create that in Europe. And they have learned the bitter prices paid for chattel slavery and the near-extermination of the native populations.

Knowledge is power. Perhaps a new course can be taken. Accordingly, an expedition is sent to the New World to see just what might be happening there and what might be done. They are armed with their technology, among which are a radio and an airship. More importantly, they are armed with the knowledge of future history and their determination not to repeat the errors of their past.

What could possibly go wrong?

What listeners say about 1636: The Atlantic Encounter

I've followed this series since the original 1632 came out. I have favorites, couldn't get into some of the later ones (like the Mughal), and got over the drift away from the main characters. The new World has taken some getting used to but I did enjoy Eddie Cantrell in the Caribbean. But what's going on with the Louisiana oil group? It just ended there and now we're in Jamestown...I don't really get the reasoning behind this particular story and the abrupt ending leaves me hanging wondering how this story got into the mix. It's not bad, just really light and confusing. I have a feeling Flint wasn't very involved with the story.

This is better than some of the more recent stories. Hopefully this trend continues! I am looking forward to reading more in this story arc.

Original storyline with best at the end

George Guidall once again does a wonderful job narrating book 25 in Eric Flynn’s Ring of Fire series. This storyline follows two uptime brothers, a spy, and a few other characters we have seen before in a buildup for a future book. The USE trade delegation scouts out the situation on the ground in New England. Richelieu’s political machinations begin to affect divided factions, both Native Tribes and Europeans alike. The writing style of the second author, Walter H. Hunt, is prominent. Hunt previously collaborated with Flint to write 1636 The Cardinal Virtues. I hope we see more good work from Hunt in the Future.

Prelude - much ado about nothing

This book is about background actions without moving forward the main story. It clearly seems to be a prelude to a subsequent book, but based on our history with Eric Flint, that will not come out for several years. So, in general the book was a disappointment for me, even though I am an avid 1632 fan.