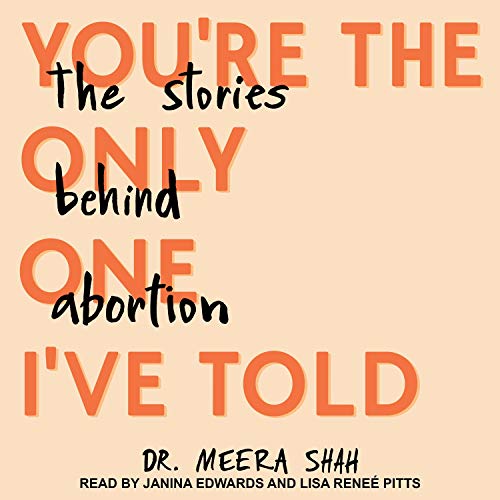 You're the Only One I've Told

For a long time, when people asked Dr. Meera Shah what she did, she would tell them she was a doctor and leave it at that. But over the last few years, Shah decided it was time to be direct. "I'm an abortion provider," she will now say. And an interesting thing started to happen each time she met someone new. One by one, people would confide - at BBQs, at jury duty, in the middle of the greeting-card aisle at Target - that in fact they'd had an abortion themselves. And the refrain was often the same: You're the only one I've told.

This book collects those stories as they've been told to Shah to humanize abortion and to combat myths that persist in the discourse that surrounds it. An intentionally wide range of ages, races, socioeconomic factors, and experiences shows that abortion does not happen in isolation - it always occurs in a unique context. Today, a health-care issue that's so foundational to reproductive, social, and economic freedom for millions of people is exploited by politicians who lack understanding or compassion about the context in which abortion occurs. Stories have power to break down stigmas and help us to empathize with those whose experiences are unlike our own. They can also help us find community and a shared sense of camaraderie over experiences just like ours. You're the Only One I've Told will do both.

What listeners say about You're the Only One I've Told

Great way to open your mind on abortion rights. Loved the author and the reader.

Everyone should read this book, listen to the stories in here-they are so important!

Admittedly, I am pro women's rights, but this took my thought process to a new level! Every story had its own unique flare and background. I wish this was read/listened to by the masses.

This book educated me and built empathy for women who choose abortion for healthcare. The stories range from all backgrounds and situations.

I loved this book due to the FACTS that based the rest of the literature. She quotes her resources which allows you to know that it’s not an “agenda” being pushed. Very well done.

This book is so well written and enlightening. I appreciate how Dr Shah lists every person’s pronouns at the start of each chapter and the range of patients she included.

This book was very informative both on the human experience and medically. There was also a ton of information on restrictions and barriers throughout the years and the impacts they can have on different types of people. I definitely recommend this read.

good stories, narration could have been better

Author had good stories to tell, but with interwoven stories that were not separated by the narrators from the main story, it was a challenge to always follow everything.

so informative and compassionate

I truly enjoyed this book. I feel that it's relatable for all people who have experienced abortion or know of someone who has. it shows all sides of the emotions that one can feel as well as gives a history break down and brings it to the present. I love that the author put her story in the book and shows the connection to each person. this is helpful in letting people know they are not alone and truly help with any guilt that one may feel to know it's okay and this is a complex situation often times and has many layers.