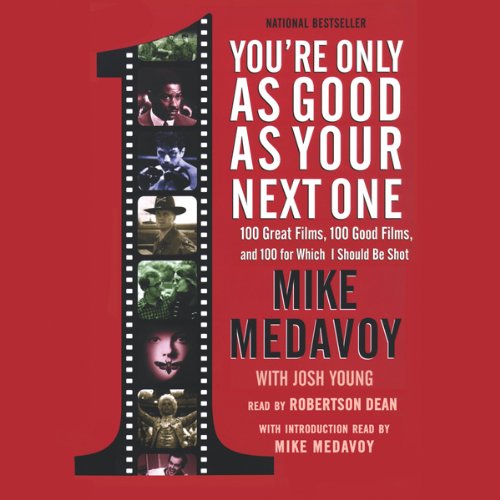 You're Only as Good as Your Next One

By: Mike Medavoy,Josh Young
Narrated by: Robertson Dean
Try for £0.00

Mike Medavoy is a Hollywood rarity: a studio executive who, though never far from controversy, remained loved and respected through four decades of moviemaking. He helped bring to the screen some of the most acclaimed Oscar-winning films of our time, including Apocalypse Now, One Flew over the Cuckoo's Nest, Amadeus, The Silence of the Lambs, Philadelphia, and Sleepless in Seattle.

Of course, there are the box-office disasters, which also have a place in his fascinating memoir, a pull-no-punches account of financial and political maneuvering, of creativity stymied, and of working with the industry's brightest star power.

An eyewitness to Hollywood history in the making, Medavoy gives a powerful and poignant view of the past and future of a world he knows intimately.

I like Hollywood gossip. And this had it all.
Takes you to another world of showbiz and glamour.
Great for listening in the car when you are on a long journey.

Well read and fascinating on the one hand. But also very scattershot and repetitive, it could have used a stronger copy editor.

Not Great, Quite Good, No need to Shoot

Narration was good but the story was not as engrossing as I was expecting. I thought he would be discussing in more detail the great, good and awful. Instead there was a huge amount of self satisfaction (I should have known better, this is a Hollywood Insider after all) about some very spurious links to great films and very little discussion on the really bad ones, which is where the interest really would have been.

Essential reading for a fan of movies!!

I have read more books on movies and movie-making then I can count and thanks to Audible I will be reading more. With the exception of "Final Cut" this is the best book about the film industry that I have ever read. Could NOT put it down. Who knows how many miles I walked while listening to this. Medavoy was one of the great movers and shakers in recent film history and his story includes some of the classic films of all time ("One Flew Over The Cuckoo's Nest", "Amadeus", "Platoon"). It helps that he has a great sense of humor about himself and seems intent on dealing with everyone even-handedly (except Peter Gruber). Robertson Dean is a great narrator and keeps a steady hand at the microphone.

Pay no attention to the man behind the curtain...

A wonderful behind-the-scenes look at the career of one of the most prolific producers in movie history that feels like an honest genuflection upon the oftentimes good, and occasionally regretful, decisions made in an industry renown for its ability to deceive itself. Many books of this kind contain a significant amount of revisionist history that requires a healthy dose of salt during consumption. This book manages to tell a series of stories that allows a reader to understand the events disclosed within its pages are from one source who can only tell one side. It attempts to be both fair and entertaining from cover to cover, and that effort is appreciated. Moments of repetition pass quickly enough since they often lead into another chapter within his life, and some of those scenes revealed are laugh out loud entertaining. Touching to a degree, this book was a read I would recommend to anyone who enjoys cinema history, or autobiographies in general. A great addition to any library!

A good overview of the industry through the years.

Would you listen to You're Only as Good as Your Next One again? Why?

If I was out of books, yes. It has enough morsels of Hollywood History that it is a pretty good read.

What other book might you compare You're Only as Good as Your Next One to and why?

"CAA Powerhouse" - The story of CAA - Which is a history heavy book.

What does Robertson Dean bring to the story that you wouldn’t experience if you just read the book?

As always, the emotion of the book is better when read to you.

Due to length, no.

I listened to this for the first time in 2022 so it didn't get into the time after 2003 and all of the turbulence between then and now. However it was still a good book. excellent narrator and you get to hear from the man himself Micheal Medavoy at the very end.

The author’s own voice should’ve been used for narration throughout this book and not just the last dwindling minutes. The narration lacked connection to the material.

The book feels like it lacks a cohesive direction at times, but it is packed with great general overview and insight into the movie industry. More minutia and details would’ve been preferable concerning how movie deals are made and also introspective analysis in addition to owning up on the authors part for his decisions.

The author did a great job presenting a fair, balanced and well-rounded recap of his life. Deeper personal revelations from Me. Medavoy would have made this an overall 5 star Story Review.

As a young, 27 year old producer working in my first feature length film, this piece of literature from Mike Medavoy is extremely useful. So many lessons learned from Mikes life as a studio executive… we need a big shot producer from 2022 to write something like this with everything going on with streamers/web 3… Kevin Feige… where you at?! Write a book like this!

We get to see how the sausage is made. Fascinating accounts of how the movies we enjoyed came to be. We blithely watch the entertainment from the Hollywood factory with no idea of the behind the scenes activities. The narration is clear and enthusiastic. This is a happy book. It would be ironic if it led to a movie.

The best part of this book

...was the fact I didn't have to pay for itm

Boring and self aggrandizing, very little actual insight into the movie making process.

Read more like he was bragging about his hits and excusing his misses, then countering arguments from articles 20 years ago.

The story may have benefited from an objective writer, a la Disney War. That would also have cut down on the repetitive, stream of consciousness style.

For example, drink every time he says "Cuckoo's Nest ", or any of his other early 70s hits. You'll be Loaded. it were only in the chapter dedicated to that era, it may've flown, but this went from intro to the last page.

There wasnt even any clear dilenation between decades or influences. I only vaguely know what a producer does after reading this, and I had about the same understanding going in. He's the money guy. Not the creative guy. I'll remember that next time I try to read a book that requires actual narrative .

my detail oriented soul loved every bit of this. love the truth. no bs here. great listen