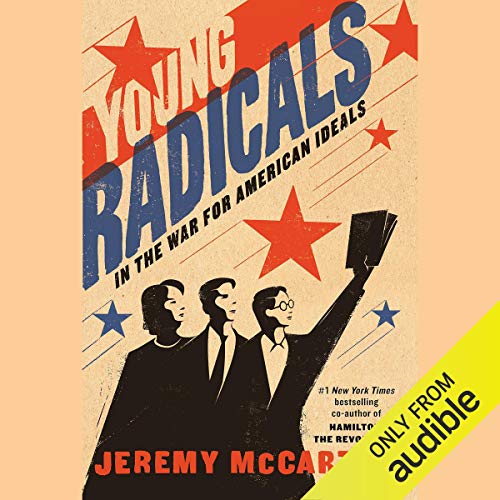 From the coauthor of the New York Times best seller Hamilton: The Revolution, the stunning story of five American radicals fighting for their ideals as the country goes mad around them.

Where do we find our ideals? What does it mean to live for them - and to risk dying for them? For Americans during World War I, these weren't abstract questions. Young Radicals tells the story of five activists, intellectuals, and troublemakers who agitated for freedom and equality in the hopeful years before the war, then fought to defend those values in a country pitching into violence and chaos.

Based on six years of extensive archival research, Jeremy McCarter's dramatic narrative brings to life the exploits of Randolph Bourne, the bold social critic who strove for a dream of America that was decades ahead of its time; Max Eastman, the charismatic poet-propagandist of Greenwich Village, whose magazine The Masses fought the government for the right to oppose the war; Walter Lippmann, a boy wonder of socialism who forged a new path to seize new opportunities; Alice Paul, a suffragist leader who risked everything to win women the right to vote; and John Reed, the swashbuckling journalist and impresario who was an eyewitness to - and a key player in - the Russian Revolution.

Each of these figures sensed a moment of unprecedented promise for American life - politically, socially, culturally - and struggled to bring it about, only to see a cataclysmic war and reactionary fervor sweep it away. A century later, we are still fighting for the ideals these five championed: peace, women's rights, economic equality, freedom of speech - all aspects of a vibrant American democracy. The story of their struggles brings new light and fresh inspiration to our own.

"One of the exciting new nonfiction books this summer." (Sarah Begley, Time)
"McCarter's prose is engaging, moving, and, at times, laugh-out-loud funny. Recommended for young radicals today who want to understand past attempts to change the world in the face of repression." ( Library Journal)
"Jeremy McCarter's gripping exploration of what drives young people toward revolutionary acts, in even the most desperate days, could not be more relevant to our current political moment." (Rebecca Traister, New York Times best-selling author of All the Single Ladies)

What listeners say about Young Radicals