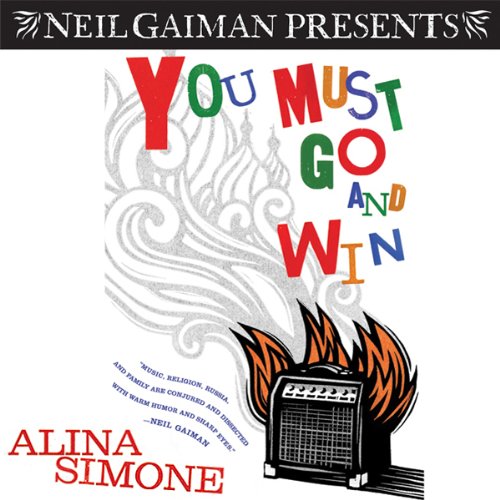 You Must Go and Win: Essays

Award-winning author, narrator, and screenwriter Neil Gaiman personally selected this book, and, using the tools of the Audiobook Creation Exchange (ACX), cast the narrator and produced this work for his audiobook label, Neil Gaiman Presents.

A few words from Neil on You Must Go and Win: "Her stories are funny, heartwarming, tragic - often all at the same time. Her subjects, whether music, religion, Russia, or family, are conjured and dissected with warm humor and sharp eyes. Probably it's a really good thing she never became an international rock star; she wouldn't have written this if she had.... This is her first audiobook, and she reads it as well as she writes."

In the wickedly bittersweet and hilarious You Must Go and Win, the Ukrainian-born musician Alina Simone traces her bizarre journey through the indie rock world, from disastrous Craigslist auditions with sketchy producers to catching fleas in a Williamsburg sublet. But Simone offers more than down-and-out tales of her time as a struggling musician: she has a rapier wit, slashing and burning her way through the absurdities of life, while offering surprising and poignant insights into the burdens of family expectations and the nature of ambition, the temptations of religion, and the lure of a mythical Russian home.

Wavering between embracing and fleeing her outsized and nebulous dreams of stardom, Simone confronts her Russian past when she falls in love with the music of Yanka Dyagileva, a Soviet singer who tragically died young; hits the road with her childhood friend who is dead set on becoming an "icon"; and battles male strippers in Siberia.

Hailed as "the perfect storm of creative talent" (USA Today, Pop Candy), Simone is poised to win over fans of David Rakoff and Sarah Vowell with her irresistibly funny and charming literary debut.

What listeners say about You Must Go and Win: Essays

If you could sum up You Must Go and Win: Essays in three words, what would they be?

What does Alina Simone bring to the story that you wouldn’t experience if you just read the book?

The author was an excellent performer.

This book made me laugh out loud and think about my own life in a new way.

Yes, I'd recommend this to any one who is young of heart, or could use a good laugh.

I love the freshness of listening to something say out loud what I would probably be thinking. Her humor is self-deprecating and pointed. I really enjoyed hearing anecdotes about the various cultures, especially the Italians with their 10 cups of black espresso daily while living with Mama until well past the age of 40. Like that.

Her voice delivers the story in a natural speaking voice.

Wearing Your Cat Like A Hat, and other Ways to Be Stunning.

I think it would make a really funny and interesting movie, with all of the changes in locale, people, and rustic living conditions. Loved it!

It took me a lisstle while to start enjoying this, I found the first couple of strories a little dull and all over the place, and I thoguht the protaginist was a bit whiney, but then it hits a better narrative flow, and I found myself caring about Alina, the author, main character and narrator. By the end I was sad it was over.

Would recommend to many of my friends

Hilarious! For anyone who has ever had dealings in foreign countries, with art students, with music snobs, and/or with hipsters, etc., this book gets it. It really just nails it.

only if they already like Simone or her musical niche. I didn't finish it.

What could Alina Simone have done to make this a more enjoyable book for you?

Do you think You Must Go and Win: Essays needs a follow-up book? Why or why not?

It passed the time - when I wasn't feeling confused about the sequence of events anyway.

Would you listen to another book narrated by Alina Simone?

I liked her reading style. I'd listen to her read another one.

The story is not in chronological order. It is very jarring to try to mentally piece it together in the right order. I thought there were some fun and cute adventures in the story, but overall it wasn't as fun or funny as Mr. Gaiman claims. Maybe if you are more familiar with the author and/or her friends you'd relate to the book better.

This is a very funny book. Worth listening! I laughed a lot, and could sympathize with Alina.

I really enjoyed her lightly self-deprecating sense of humor and the colorful Russian flavor in her writing, especially after reading The Tiger, which was quite descriptive of far eastern Russia/Russians but in a different way.

I loved this book, although I broke it up instead of listening to it in one sitting. I enjoyed turning it back on when I wanted a giggle but I was not willing to commit hours to it. Simone has a way with words that is a joy to listen to. I am usually wary of an author narrating their own books but in this collection it just works.

It started off pretty fun, with lots of laugh out loud moments, but then tailed off and became less interesting. It wasn't bad, just not great, and certainly not as insightful as Gaiman led us to believe.