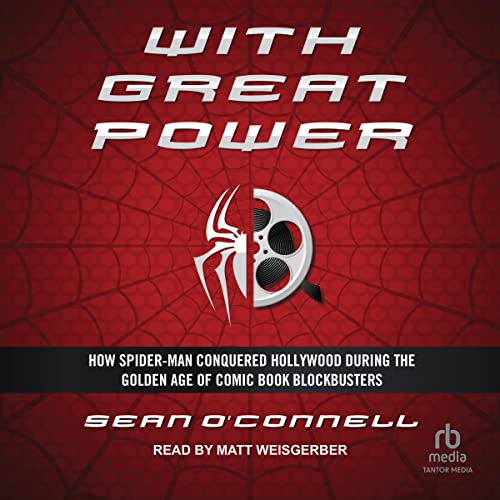 By: Sean O'Connell
Narrated by: Matt Weisgerber
Try for £0.00

If Hollywood had a superhero throne, Spider-Man would be perched upon it. As the most popular superhero in the world, the web-slinger plays a pivotal role in three of the six highest-grossing film franchises in history: the Marvel Cinematic Universe; the Avengers quadrilogy; and the Spider-Man movies themselves.

Spidey has come a long way since Marvel guru Stan Lee first concocted him in 1962, but until now his cinematic journey has not been fully documented. The wall-crawler's history in Hollywood is a saga filled with failed attempts, behind-the-scenes squabbles, franchise reboots, corporate intrigue, and a host of A-list names—including, of course, stars Tobey Maguire, Andrew Garfield, and Tom Holland. With Great Power is a lively and memorable account of the character's rise to box-office supremacy, revealing how his movies continue to influence the comic-book adaptations being made today. Drawing on exclusive access to and extensive interviews with directors, actors, producers, and screenwriters, veteran film reporter and author Sean O'Connell here gives the inside scoop on how Spider-Man clambered his way to the top of Hollywood's superhero heap.

What listeners say about With Great Power