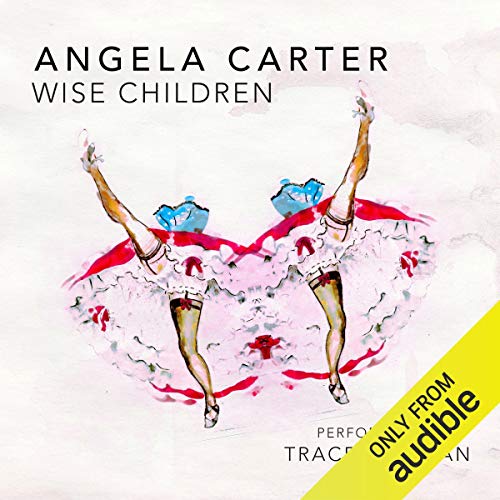 By: Angela Carter
Narrated by: Tracey Ullman
Try for £0.00

Angela Carter's last book, Wise Children, was written and published whilst she was dying from cancer, in 1991. Transcending her physical deterioration in admirable fashion, Carter made this a most life-affirming novel, in support of the vitality of 'otherness.'

This Audible exclusive production, expertly read by Tracey Ullman, stands in celebration of a legendary author known for the richness of her imagination, wit and feminist insight.

Wise Children is a richly comic tale surrounding the tangled fortunes of two theatrical families. Seen through the eyes of 75-year-old Dora Chance, and her twin Nora, the novel unfurls within the space of a day, as the sisters prepare to attend their perennially absent father's 100th birthday party.

With a wide and colourful, often rather crazy cast, the story veers off in a multitude of directions as Dora's reminiscent narrative slips from past to present suddenly and seamlessly throughout.

Packed with gags, tears, histories, mysteries, feuds and romantic (and some not-so-romantic) unions, Wise Children, doesn't miss a trick. Playing on Carter's admiration of Shakespeare and the surreal, the novel is jam-packed with entrancing magic realism and elements of the carnivalesque.

Angela Carter was born in 1940, in Sussex. She grew up in the shabbily respectable south London district of Balham, the second child of an eccentric journalist father and a neurotic housewife mother.

She studied English at Bristol University before travelling extensively, teaching and writing numerous best-selling novels. They have all received considerable critical acclaim and remain firm favourites of modern English literature.

Angela was a devout feminist throughout her life, wrote for Spare Rib magazine and voted Labour. Her novels are wholly reflective of her world views and continue to inspire new generations of men and women worldwide.

First appearing on British screens in comedy sketch shows such as A Kick Up the Eighties, alongside Miriam Margolyes, Three of a Kind, with Lenny Henry, and Girls on Top, with Dawn French and Jennifer Saunders, Tracey quickly established herself as a comedic genius.

What listeners say about Wise Children

This is my favourite book of one of my favourite authors. A romp through the singing and dancing life of the main character, Dora Chance who, in spite of ups and downs remains full of fun, naughtiness and kindness.
The reader, Tracey Ullman, does a great job of making you believe that it really is Dora's voice you are hearing.
Loved every second of it, sniggering and sobbing by turns.

Pretty much the best book ever. I had an older version with a different narrator that I loved, so this had a lot to live up to but was a great performance too.

Superb reading but didn’t care for any of the characters or their journeys, not for me.

Superb reading but didn’t care for the characters, found story dull, it was not for me.

This is an entertaining story, skilfully written with wry and quirky humour. One might need to be a bit of an Anglophile to enjoy the material and at least a liking for Shakespeare ! The historical periods over the generations of the novel feel authentic and musical and social references accurate. The narration is expert and despite being almost wholly in first person characters are well differentiated. Easily recommended.

omg what a brilliant performances from Tracey Ullman!!!!
the story lacks drive and connectivity. it was only the narrator that kept me in this story

I adored Wise Children and was smitten from the off. Carter’s craft is at it’s pinnacle; she has created characters which are vibrant and fully complete.

The story centres on twins Nora and Dora Chance and begins the morning of their 75 birthdays at their home in Brixton, the wrong side of the tracks. The arrival of an invitation to the Father’s 100th birthday to take place that evening jolts a cavalcade of memories into life. Loves won and lost, family secrets held and hidden for decades, careers on the stage as song and dance girls. A bitter sweet strand runs right through the novel and will draw you in to the end. Everyone should meet Nora and Dora.

Tracey Ullman is an absolute star, her timing and delivery were spot on. She fully brought the voice is each character with pathos and joy.

What a wonder of a novel! Carter left with a bang! Life affirming. A joy.

slow starter and not a lot happens but good dry humour love the way the storey is told can almost imagine a wink nudge nudge.

I don't tend to write full reviews, but I felt like I had to say something about how amazing a performance this is. I could almost see her! one of the best audio books I've listened to, and I've listened to a lot.

I have read Wise Children many times and listened to an earlier audible version which I thought could not be superseded. Tracey Ullman has truly done this book justice. An incredible listen to Angela Carter as always at her best.

Oh my God, Tracey Ullman!!! This is the best audio book performance I’ve ever heard. And the book is wonderful. What an absolute pleasure to hear masters at their finest.

The voice made the experience

Incredible performance by Tracey Ullman. More than a book. The Bard would be proud. Kudos.