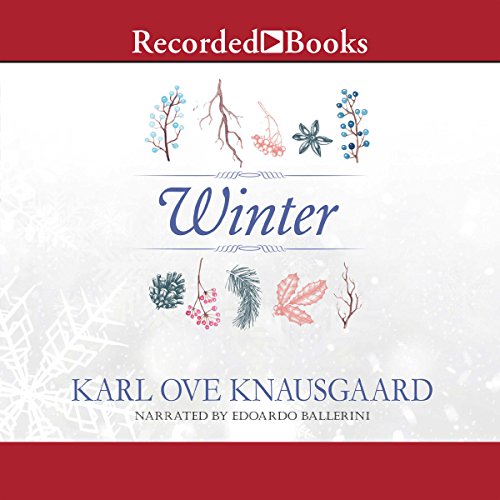 By: Karl Ove Knausgaard
Narrated by: Edoardo Ballerini
Try for £0.00

The second volume in his autobiographical quartet based on the seasons, Winter is an achingly beautiful collection of daily meditations and letters addressed directly to Knaugsaard's unborn daughter

In Winter, we rejoin the great Karl Ove Knausgaard as he waits for the birth of his daughter. In preparation for her arrival, he takes stock of the world, seeing it as if for the first time. In his inimitably sensitive style, he writes about the moon, water, messiness, owls, birthdays - to name just a handful of his subjects. These oh-so-familiar objects and ideas he fills with new meaning, taking nothing for granted or as given. New life is on the horizon, but the earth is also in hibernation, waiting for the warmer weather to return, and so a contradictory melancholy inflects his gaze.

Startling, compassionate, and exquisitely beautiful, Knausgaard's writing is like nothing else. Somehow, he shows the world as it really is, at once mundane and sublime.

What listeners say about Winter

Fall Vignettes for an Unborn Daughter

"Winter has almost no self-confidence after the triumph of summer and autumn's resolute clean up that followed, for what is winter, with its snowfalls and its icing of the waters, other than a cheap conjurer?"
- Karl Ove Knausgård, Winter

I'm definitely a Knausgård fan. I love his observations. I love his energy. I love his prose. He isn't always perfect, but he is constantly pushing and exploring. This book is book 2 in his Årstidsencyklopedien (Seasonal Encyclopedia) Series. Winter or Om vinteren. His first book in the series was Autumn or Om høsten. The structure of these books is relatively (and seductively) simple. Knausgård writes every day for three months on a variety of subjects that relate to the season and month he is writing about, for example, in Winter he writes about:

This is just a sample of the mini-essays. He writes about 20 essays a month. So, 20 for December, 20 for January, 2o for February. He also includes 3 essays at the beginning of each month; two letters to an unborn daughter, and one letter to a newborn daughter. Essentially, these letters are open letters to his unborn, and in late January, newborn daughter. His fourth child. These essays are interesting, not always directly related to the seasons, but generally dealing with people, objects, animals, and concepts that interest him. And like Montaigne's essays, the subject is often just the starting point. His curiousity and thoughfulness allow these subjects to open and spin a bit. They are sometimes uneven, and some of them fall flat, but here is a guy that will, over the course of a year, write four books with about 240+ essays on various subjects. Not too shabby.