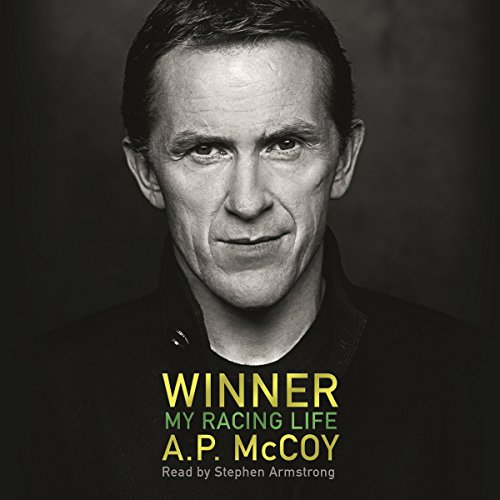 Tony (A. P.) McCoy has collected a record 20 consecutive jump jockey titles to date, and since 1992 he has ridden over 4,300 winners. This powerfully honest memoir looks at life at the very top in National Hunt racing - and beyond, discussing fatherhood, writing novels and his decision to retire while he's still a long way ahead.

It is a definitive autobiography that is themed around A. P.'s 10 most important races: his first ride, first race, first fall, first win, greatest disappointment - and greatest triumph.

These are the memoirs of a true champion, an icon of sport whose astonishing achievements over the past 20 years are unlikely to be surpassed. It is a great story of courage and triumphs, setbacks and pain, the private and public life of a riding phenomenon. Read by Stephen Armstrong.

What listeners say about Winner

but it is important

the whole book is about being a winner , yet when letting down a trainer at Cheltenham opting to ride a different trainers horse the phrase it's not that important anyway is used , for the trainer it must have been important if they got so angry .

I love this book as I love horse racing but AP really gets into the deepest parts of his career and it’s so interesting to listen too and even if your not into horse racing this is great .

Lot's of the story repeatedly crops up in the book. Still enjoyable if you are a racing fan.

A book as good as his career

From start to finish I couldn’t get enough! His family, his mentality, his dedication, the ups and the downs it was gripping and a pleasure to read/listen!

Starts well but gets a bit boring and repetitive after first 4 chapters or so. Not one of the more memorable sports autobiographies out there.

enjoyed listening and hearing all about A P McCoys racing life and all about his big wins as a follower of horse racing.

I enjoyed this book and very much enjoyed the authenticity of the reader. It was easy to follow and well organized.