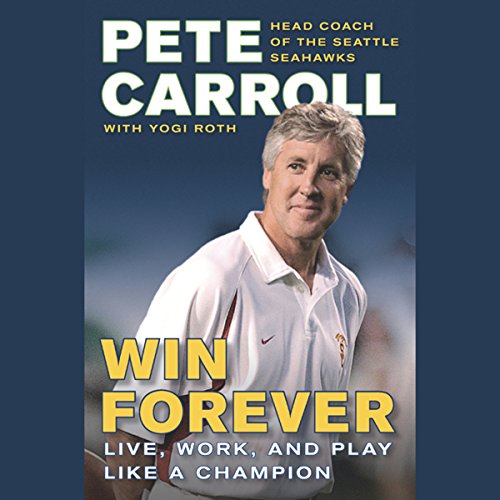 "I know that I'll be evaluated in Seattle with wins and losses, as that is the nature of my profession for the last 35 years. But our record will not be what motivates me. Years ago I was asked, 'Pete, which is better: winning or competing?' My response was instantaneous: 'Competing...because it lasts longer.'"

Pete Carroll is one of the most successful coaches in football today. As the head coach at USC, he brought the Trojans back to national prominence, amassing a 97-19 record over nine seasons. Now he shares the championship-winning philosophy that led USC to seven straight Pac-10 titles.

This same mindset and culture will shape his program as he returns to the NFL to coach the Seattle Seahawks. Carroll developed his unique coaching style by trial and error over his career. He learned that you get better results by teaching instead of screaming, and by helping players grow as people, not just on the field. He learned that an upbeat, energetic atmosphere in the locker room can coexist with an unstoppable competitive drive. He learned why you should stop worrying about your opponents, why you should always act as if the whole world is watching, and many other contrarian insights.

Carroll shows us how the Win Forever philosophy really works, both in NCAA Division I competition and in the NFL. He reveals how his recruiting strategies, training routines, and game-day rituals preserve a team's culture year after year, during championship seasons and disappointing seasons alike.

Win Forever is about more than winning football games; it's about maximizing your potential in every aspect of your life. Carroll has taught business leaders facing tough challenges. He has helped troubled kids on the streets of Los Angeles through his foundation A Better LA. His words are true in any situation: "If you want to win forever, always compete."

What listeners say about Win Forever

Very enilightening and thoughtful book by a football legend. Highly recommended and to the point.

This book is SO good!

The whole book is great to listen to, to listen to Pete’s life and trials, and tribulations, his setbacks and successes.

I now appreciate that, or rather why he didn’t get a narrator to present this book, because he wanted to tell the story himself, and I’m sure from his point of view, it was quite cathartic/therapeutic to some-up his life in football to date. I thought to begin with, they could’ve picked a better narrator, (not knowing who Pete was) but I have now change my mind🤣🤣.

I learnt to appreciate his accent and presentation style, and the best part of the book by far is the last chapter, and that is not meant in a derogatory way, it is meant as a genuine compliment. The summary was amazing but it would’ve made no sense if I hadn’t listened to the whole book.

What a great book!

A glimpse, but only a glimpse, into brilliance

For the last 10 years I "hated" Pete Carroll and his teams in that kind of sports "hate" that people reserve for umpires and players like Derek Jeter. It's nothing personal. These are the villains who make their own luck and seem to always beat the team I am rooting for.

However, after listening to GRIT by Angela Duckworth, I felt compelled to learn more about Pete Carroll and his philosophy. Recently in Seattle, I could see first hand how his dreams impacted not only his players but literally *millions* of fans as the Seahawks became part of North West Washingtons identity.

I really wanted this audio book to be a five out of five, and I am grateful that Mr. Carroll narrated his own work. I could not rate if 5 because well, it lacked two things.

1 - punch, or authenticity. Duckworth's performance came across like you really were sitting down and having coffee with her. Mr. Carroll's came across like you were at a press conference. I could not help but think he would have more to say, but was too seasoned to say it publicaly.

2- While his over arching view he clearly articulates, he does not provide detail. Over and over again he talks about how it his plans were supported by painstaking, meticulous detail. He does not provide details and indeed, it would probably be impossible. All the same it would have been fantastic to have ONE example. I wish he could have walked through one example to show how he translated his beliefs into a plan. I wanted to know how he communicated and got others to act with him.

There were glimpses of this, but it felt like hearing math word problems described but not solved. Only occasionally was an an answer given. You know they can be solved, but you're not quite sure how to solve them yourself. I have a new found appreciate for Mr. Carroll and his work and I still recommend this book. It feels to me like his message is a clue, a sign post in a search to create excellence in ones own life.

(Please forgive any type or grammar errors in this review, I wrote this on my phone and spell check does not work inside the audible app)

I watch football with my boys knowing little about the game and my grandchildren in Houston know the Seahawks by name better than I. This book is for anyone who wants to win in life forever; I have started my vision!

Review by a non-football fan

Take the review with a grain of salt because I am not into football. Fans will probably like this book a lot more.

I read this book because I wanted to learn from a successful person with a mindset different from mine. I learned a few things but what mattered to me could have been distilled into about 10 pages. It would be cool to see these principles applied to raising children.

The short version of what I found valuable is in Pete Carroll's youtube video on Confidence, Trust, and Focus.

Inspired and simple, Pete walks us on his journey and the results speak for themselves.

Winning Is More than being a Champion

How does a man remain on top after suffering one of the most disappointing upsets in the Super Bowl? Win Forever was written during the transitional time between USC and the Seahawks. Pete Carroll had already applied a purpose to his life that made himself and others he could influence their own competitors. He would be the best he could be with joy and excitement.

Whether an athlete or coach, business executive or laborer, military officer or enlisted, Win Forever can inspire a man to set and achieve personal goals. Carroll does this with personal anecdotes of successes and failures in his own life.

Real and relatable for the true competitor. Great energy with plenty of inspiration. Defiantly a book I will be coming back to when I'm running low on the right energy to get to the next step.

Thanks Pete for putting this book together!

Phenomenal approach to a winning philosophy

Really enjoyed this read/listen and I have a new found respect for Coach Carroll. Will definitely apply this to my work as a leader in Army Special Operations

loved the book, liked the fact Pete narrated it himself that made it much more personal. What a great philosophy for life and the game of football.

Amazing book for any coach

This is a great book for any coach I coach hockey but the philosophes taught in this book can apply to any sport.

Pete has a great story about a coach who is fired struggled learn from the other great coach and then revised his philosophy that went on to turn him into a championship coach.

I love everything about Pete! good spirit is amazing and it shows! Go Hawks! LOB 12THMAN