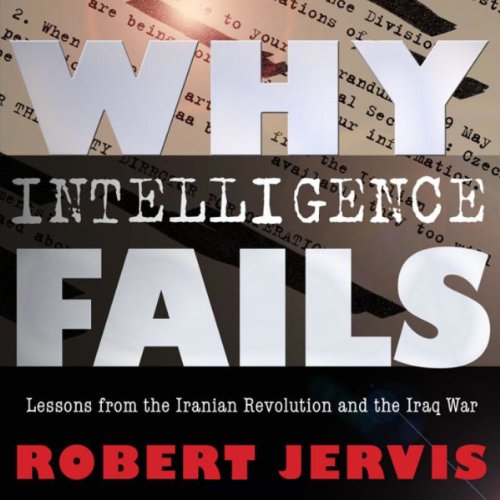 By: Robert L. Jervis
Narrated by: Kevin Pierce
Try for £0.00

The U.S. government spends enormous resources each year on the gathering and analysis of intelligence, yet the history of American foreign policy is littered with missteps and misunderstandings that have resulted from intelligence failures. In Why Intelligence Fails, Robert Jervis examines the politics and psychology of two of the more spectacular intelligence failures in recent memory: the mistaken belief that the regime of the Shah in Iran was secure and stable in 1978, and the claim that Iraq had active WMD programs in 2002.

The Iran case is based on a recently declassified report Jervis was commissioned to undertake by the CIA thirty years ago and includes memoranda written by CIA officials in response to Jervis's findings. The Iraq case, also grounded in a review of the intelligence community's performance, is based on close readings of both classified and declassified documents, though Jervis's conclusions are entirely supported by evidence that has been declassified. In both cases, Jervis finds not only that intelligence was badly flawed but also that later explanations - analysts were bowing to political pressure and telling the White House what it wanted to hear or were willfully blind - were also incorrect. Proponents of these explanations claimed that initial errors were compounded by groupthink, lack of coordination within the government, and failure to share information. Policy prescriptions, including the recent establishment of a Director of National Intelligence, were supposed to remedy the situation.

In Jervis's estimation, neither the explanations nor the prescriptions are adequate. The inferences that intelligence drew were actually quite plausible given the information available. Errors arose, he concludes, from insufficient attention to the ways in which information should be gathered and interpreted, a lack of self-awareness about the factors that led to the judgments, and an organizational culture that failed to probe for weaknesses and explore alternatives. Evaluating the inherent tensions between the methods and aims of intelligence personnel and policymakers from a unique insider's perspective, Jervis forcefully criticizes recent proposals for improving the performance of the intelligence community and discusses ways in which future analysis can be improved.

The book is published by Cornell University Press.

"In this cogently argued and revealing book, Jervis, a veteran CIA consultant, uses the Iranian and Iraqi cases to dissect why, in some circumstances, intelligence fails to provide accurate analysis to policymakers....Highly recommended for all interested academic and general readers." ( Library Journal)
"There is no one better than Robert Jervis at dissecting intelligence, and this book is proof. Happily, at long, long last he has managed to free his three-decade-old inside postmortem on intelligence failure during the early stages of the Iranian revolution from the dark of classification, and he has coupled that with his recent writings on intelligence's woeful performance over those Iraqi weapons of mass destruction that weren't. His conclusion is both wise and discomfiting." (Gregory F. Treverton, RAND Corporation)
"This is the sort of thorough, integrative, and provocative work we've come to expect from Robert Jervis. Students of the craft will find much to debate and ponder in this thoughtful assessment." (John McLaughlin, Paul H. Nitze School of Advanced International Studies, The Johns Hopkins University)

What listeners say about Why Intelligence Fails

Very strong and valid points . Absolutely loved the details and explanations behind the topics and chapters

The assessment of Iraq contradicts a lot of the journalistic reporting on the events (the presence of WMD was a rational view unaffected by political pressure). It's interesting in this regard because it looks for ways the intelligence community could have given a more accurate assessment without judging the background political environment.

The late Professor Jervis crushed this one

this is an excellent book, where Professor Jervis offers a balanced and comprehensive view of intelligence analysis and how it and its producers relate to policy makers and the policy context that both sets of actors operate within. while this is certainly not a book for beginners, as the reader will require a solid basis of understanding in international relations, security, diplomacy, and intelligence, but Professor Jarvis is describing a world that is exceedingly complex and in which he tries and succeeds to break down into more digestible bites for any curious reader. he succeeds most in his fair and balanced analyzes of the psychological States of politicians and intelligence officers, and uses these psychological perspectives to explain why decisions are made and why mishaps may occur. an excellent example of this is the discussion of wmd Iraq in 2003, specifically how Professor Jervis contracts the seemingly pre decided need of the Bush administration to label Iraq as a hostile regime, versus an intelligence community which either did not adequately Express or was not received through their message that Saddam had many indicators of interest or possession in acquiring extremely dangerous weapons, but the fixation on the colon Powell presentation, and narrowly looking for yellow cake, plutonium 234, aluminum tubes, or centrifuges, obscures the overall pattern of behavior that Saddam was exhibiting at the time, and which may have been more useful in providing a convincing intelligence analysis to policy makers at the time. in short professor jervis's book is indispensable for anyone in the intelligence or policy communities, or anyone in the public interested in a well-researched and very informative book from one of the fields all time great scholars. Rest in Peace Professor Jervis.

This is an interesting book, definitely make you look at Intel differently. The conclusion is very good and interesting.