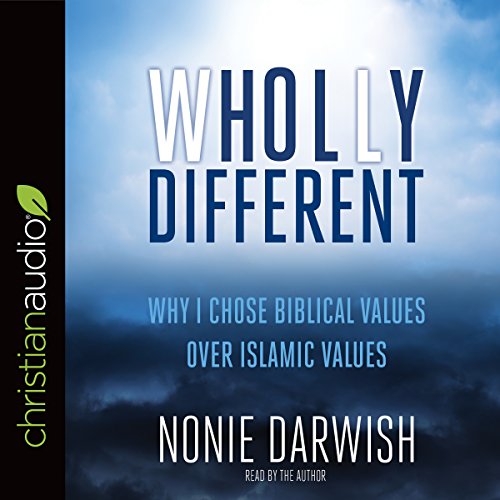 Western countries are ignorant of true Islamic values, says Nonie Darwish. Darwish is an Egyptian American, former Muslim human rights activist who is frustrated with mainstream America's talk of tolerance and assimilation. In Wholly Different, Darwish sets non-Muslims straight about tenets of Islam that are incompatible with free society.

For the first time, Darwish tells the whole story of her personal break with Islam, starting with the brutal physical violence and rigid class system she witnessed and culminating with the spine-tingling visit she received from President Nasser after her father, Fedayeen commander Mustafa Hayez, was assassinated by Israeli Defense Forces. She lays out the "seventh-century values" of Islam that religious extremists are so intent on protecting through global warfare - values that set Islam apart from the other Abrahamic religions.

What listeners say about Wholly Different

Very helpful, giving a clear understanding of Islam, from someone who's been there. A must read for anyone wanting to know the truth.

This is one book I have to listen to a second time right away. It is so densely packed with information that I have never heard before, and told from a first-person perspective as well, that it is super compelling. Everybody needs to hear or read this book!

Listen at speed 1.25 though, because her voice is a bit halting. Still, I'm glad the author read it herself.

Ms. Darwish's perspective is so singular and her critique and insight so sharp, that it becomes philosophically fascinating. Her accent makes it a bit of challenge... you really have to listen, but this is incredibly fascinating.

A balanced and clear presentation comparing the Bible to the Koran

Nonie Darwish does a commendable comparison of the Bible with the Koran by comparing direct verses in a topical style. I learned a lot and recommend this to any seeker of the truth. I increased the listening speed to 1.4 to make the book more compatible with my listening style. This is a book all Americans,regardless of political persuasion should listen to or read. I recommend it highly!

Excellent and eye opening! Well written and documented! I thoroughly learned from it. Thank you, Noni.

having lived in middle east for 12 years ...this account has further opened my eyes

the truth will keep us free

This book is exceptional. The journey this women's life is is a great resource for any American who wants to stay free.

This book is very insightful i highly recommend it and will share it with othrrs.