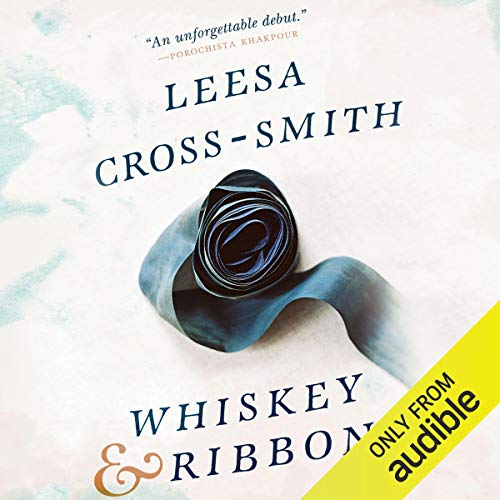 Set in contemporary Louisville, Leesa Cross-Smith's mesmerizing first novel surrounding the death of a police officer is a requiem for marriage, friendship, and family, from an author Roxane Gay has called "a consummate storyteller".

Evi - a classically-trained ballerina - was nine months pregnant when her husband Eamon was killed in the line of duty on a steamy morning in July. Now, it is winter, and Eamon's adopted brother Dalton has moved in to help her raise six-month-old Noah.

Whiskey & Ribbons is told in three intertwining, melodic voices: Evi in present day, as she's snowed in with Dalton during a freak blizzard; Eamon before his murder, as he prepares for impending fatherhood and grapples with the danger of his profession; and Dalton, as he struggles to make sense of his life next to Eamon's, and as he decides to track down the biological father he's never known.

In the vein of Jojo Moyes' After You, Whiskey & Ribbons explores the life that continues beyond loss, with a complicated brotherly dynamic reminiscent of Elizabeth Strout's The Burgess Boys. It's a meditation on grief, hope, motherhood, brotherhood, and surrogate fatherhood. Above all, it's a novel about what it means - and whether it's possible - to heal.

What listeners say about Whiskey & Ribbons

Leesa Cross-Smith is an incredible writer with the purest heart. Her love for her characters is so genuine that I fell in love with all of them too.

Walking with Evi, Eamon, and Dalton through this journey was beautiful, heart breaking, intimate and filled with so much compassion for everyone involved--including the reader. This book is the rare gem that doesn't need to resort to salacious themes or "people doing bad things to each other" in order to keep the reader engaged. This is a book about regular people who love each other as family, friends, and partners who have to navigate life together & relearn how to live in the wake of intense sudden loss.

Listening to the story read by three different actors made the book even more special because each voice brought their characters to life so vividly.

I would recommend this book and this author to anyone who loves the quiet of a snowstorm, the smooth vibes of piano music by a fire, and the warm slow burn of a good Kentucky Whiskey.

This book was sweet and deliriously heartbreaking!

I loved every moment of Dalton and Evangeline finding their love through grief. Brilliantly written.

I liked that the story was told by 3 characters using 3 different narrators.The narrators were very good. They brought the characters to life, and I cared what happened to them.This was a good contemporary story with believable characters and without a lot of foul language and graphic sexual scenes.

Solid story. I like that it was an unconventional story.
I think the voice actors were phenomenal

One of the best audiobooks I have listened to

I found the first chapter akin to being thrown in a pool without notice. Keep listening. The format is so positively creative. The characters are rich and woven together with the strings of so many emotions. One of best audiobooks I have listened to in years. Finished it in less than two days.

I loved the 3 main characters telling the story. I don't think if enjoyed this dialogue so much before. The story was sad, exciting, humorous and very real. This is a must read. Lydia Robinson

What a beautiful tale about Evi, classical dancer, Eamon a police officer and Dalton, Eamon’s brother from another mother. Evi in present day, as she’s snowed in with Dalton during a freak blizzard trying to deal with the loss of her hubby and baby daddy but forced to move on with her life; Eamon before his murder, as he prepares for impending fatherhood and grapples with the danger of his profession and his deep abiding love for Evi; and Dalton, as he struggles to make sense of his life next to Eamon’s, and as he decides to track down the biological father he’s never known since his mother has passed and he can’t get the answers he needs. This is a beautifully written book. I look forward to more from this author. The narrators all did a fantastic job.

Excellent read. Suspenseful, thrilling, tender and heart wrenching. Very well written and recommend to those who enjoy a love story w/twists and turns. Thanks Leesa Cross-Smith, I truly enjoyed this book. The readers also did a very good job.

I didn't want it to end!

I LOVED this book. Usually, I read books from the self help or memoir genre. I read this book because a friend had read it, and I was looking for a break from the norm. Oh my! Whiskey & Ribbons did not disappoint! I had all the feels from sadness, love, hope, joy, sensuality, shock, etc. I truly didn't want it to end!