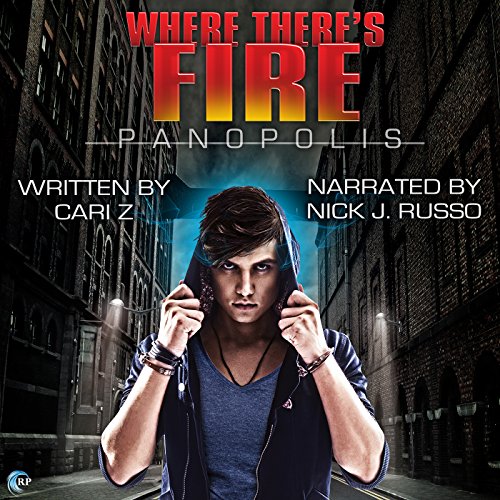 Making a name for myself as a Villain in Panopolis is hard work. Six months ago, my boyfriend broke me out of jail. Now he's spending most of his time defending our turf against other Villains he accidentally freed along with me. And my new psychic powers are not only impossible to control, but they're also giving me migraines.

But it's not all doom and gloom. My skills are improving every day, and Raul - aka the Mad Bombardier - and I have never been happier. That is, until my first solo job is interrupted by a mysterious woman who tells me that Raul has been kidnapped by a ruthless new Villain. The only way to free him is to do a job for Maggot, a man with scary ideas and an even scarier superpower.

I can't go to the cops or a Hero for help. Odds are they wouldn't listen to me anyway. If I fail, Raul will be killed. If I succeed, we'll both be bound to a man who'll stop at nothing to put Panopolis on the path to civil war. It looks like the only way to win is to take out the competition.

What listeners say about Where There's Fire

... someone is bound to get burned

What made the experience of listening to Where There's Fire the most enjoyable?

Edward's continual growth as a person, coming to terms with his new found ability.

What was one of the most memorable moments of Where There's Fire?

Edward exacting his revenge on the villain that hurt Raul.

When Edward broke into GenCorp.

Where there's fire.... someone is bound to get burned.

After listening to the first book, I had to dive right into this one. The story picks up several months after the events in Where there's smoke and Edward is adjusting to life as a villain, life with Raul. Everything is going as well as can be expected until one of the villains Inadvertently freed from Prison when Raul broke Edward out decides he wants to control the villains. And he wants Edward under his thumb. Now, exactly how do you think this demon will achieve that? If you're thinking kidnapping and torturing his lover, you'd be right.

Loved the storyline for the most part and absolutely enjoyed the narration. I really liked how Russo made the bad guy sound as disgusting as his moniker.... Maggot. And here's where we get to what I didn't enjoy so much. This villains "gift" is disgusting and I almost threw up in lunch. So be warned, there are a couple of 10-15 minute sections where you won't want to be eating or just eaten. Gross!

Aside from that, I really enjoyed the story.

Series Continues to be Super!

I had a good time with the first book in this series that introduced the unheard of thing of an ordinary joe falling for a villain and not a hero in a world where superheroes and supervillains are as common as grass. It wasn't a big leap that I was going to keep going with the series.

This really should be read/listened to in order as the series follows the same characters and is a continuation story. Edward is still has the only point of view narrated and this one picks up six months after the previous book.

Again, I found the story riveting. Book two jumps right in without the need of the set up and I was easily right back into things with Edward and Raul. The story got gritty and dark, but there is a touch of wry humor underlying it all. Edward's outlook and his thoughts are engaging so I loved having him as the narrator. He may have this new power and he is resentful of all that happened to him, but he isn't bitter and doesn't get whiny. The relationship with Raul is there and it is cozy for them both, but it is still new and growing as they adjust to a domestic partnership as well as working partnership.

Edward's villainy is a veneer at best and he ends up in situations that are not his doing when he must play the part of hero. I love the topsy-turvy way things come about through his misadventures. I like the mystery of the series arc as each book reveals a bit more of what is behind all the larger than life Supers, the experiments, and the shadowy figures controlling it all. I look forward to continuing with this unique series.

I experienced this book in the audio version. Nick J Russo captured Edward's wry 'if I didn't have bad luck; I wouldn't have any at all' humor, but he did great with the omniscient narrator blogger that began each chapter and the larger cast of characters. He captured the comic character superhero/villain story perfectly.

If you enjoyed book one, you'll be pleased

This story picks up where book one left off. We get a deeper look into the new powers of Edward and his new relationship with Raul.

I was pleased to see there was more “meat” to this story than book one and it felt more multifaceted. Fans of book one will love this and it’s not a standalone.

Nick J Russo does a tremendous job, as usual, and I was glad to see him continue the series.

Even with the (somewhat) cliffhanger ending...I loved this!

I loved Nick J. Russo's narration, especially his character voices, which are so good in this series (his voice for Raul makes me swoon).

In this installment of the Panapolis series Edward has a tentative grip on his new powers, and he and Raul are getting Edward ready to be a true villain. Told entirely through Edward's POV, the story is fast paced, humorous at times, and totally entertaining.

Edward has a lot to get through this time, dealing with problematic heroes, and terrible villains, including the grossest, most vile villain yet.

Totally entertaining, and totally worth the price of admission, I'm so happy I picked this up as a Whispersync deal for only $4.98.

There were a couple of small audio issues, mainly the sound fading in and out, but it doesn't happen enough to really mar overall listening enjoyment.

Now I have to wait impatiently for book 3, Where There's A Will, to come out on audio, because I honestly cannot imagine this series without Nick J. Russo 's voice in my ears.

Oh, what fun. If you ever decide to visit Panopolis make sure you take your autograph book and your pocketbook. Because you will be billed for any contact with the heroes but the bad guys might sign for free.