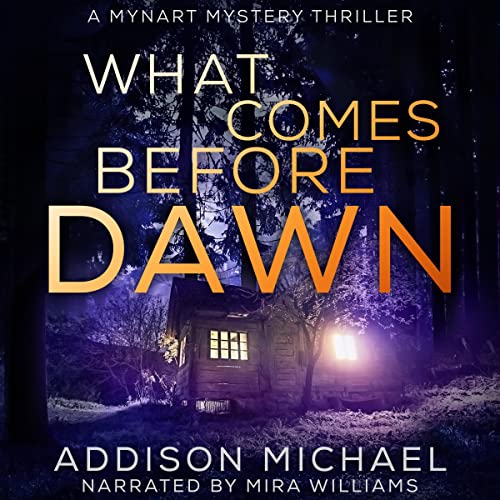 What Comes Before Dawn

By: Addison Michael
Narrated by: Mira Williams
Try for £0.00

One phone call changes her life forever. Her mother has been murdered. Paige Deffer fears she might be next.

Paige always knew something was off about her mom. Now she knows the truth. Her mom wasn’t who she said she was. A truth Paige never wanted to admit, but knew deep in her heart. She knew because she covered her mom’s tracks to stay one step ahead of the authorities. As her truth unravels around her, Paige discovers her mom isn’t the only one who is hiding her true identity. Her boyfriend isn’t who he says he is either.

The more secrets, lies, and murders that are revealed, the more Paige must delve into her hidden psyche to discover who she really is. When people from her mother’s past start showing up, Paige must discern who she can trust before it’s too late. Will Paige unveil the secrets about what comes before dawn before she suffers the same fate as her mother?

What Comes Before Dawn is book one in the Mynart Mystery Thriller psychological suspense series with paranormal elements. If you like surprising plot twists, a wonderful blend of intrigue and reflection, and engaging thriller, you’ll love the first story in Addison Michael’s series. Pick up What Comes Before Dawn to discover this unputdownable new series today!

What listeners say about What Comes Before Dawn

This book was very good. The characters were believable and the mystery did not give out before the end.

The narrator was very good.

This book was provided free of charge with the expectation of an honest review.

What Comes Before Dawn

What a fantastic story this turned into! I was on the edge of my seat wondering if Paige was next and I absolutely love that I did not figure out who killed her mom. To me that makes a fantastic thriller! The ending was such a shock. The narration was fantastic and she really made this book come to life! I can not wait for book 2.

Loved the narration of Mira Williams, who brought out the suspense , in this thriller

Great suspense and found myself second guessing every thought I had continuously. Paige’s mother has been murdered. Her boyfriend has been lying to her. Excellent twist and turns in the mystery thriller.

Wondering until the end!

I love a mystery that has me guessing until the very end. Addison Michael's first book in her Mynart Mystery Thriller series will make you think and wonder the entire time you listen. Paige has always watched out for her mother. A woman who loses time and has no recollection of what has happened, Paige feels a responsibility to keep her safe. But when her mother turns up murdered, life as Paige knows it is about to change. Characters from their past surface, each having a story or reason to be in Paige's life, creating havoc and doubts. It was easy to fall into this mystery, and just when I thought I knew the answers, a doubt or new person would show up. It's original and the ending is completely unexpected! This is my first Addison Michael book, and definitely will not be my last!

Mira Williams tells this story and it's perfection. Emotion, lack of emotion, fear, frustration, mistrust and doubt, each one precise and exactly as the story should be told. I found myself all in as I listened to this, and Williams made it come to life. Fantastic listen!

Omg, what a great story, could not stop listening to it, It twisted in a way I never expected.Mother, father daughter, all tainted with the same brush.

Edge of Your Seat

This was an amazing story to listen to. I loved following all the clues of who might have done it. Following Paige's story and her realizing that she lost track of time and might possibly be like her mother made her think a little. In the mean time, she had to be on the look out for someone possibly trying to kill her. In the mean time, her boyfriend, whom she finds out is not who he says he is, vows to protect her no matter what. Paige, however, doesn't like being followed or told what to do and doesn't make this easy. Do they find the killer in time or is Paige bound to the same fate as her mother? Sorry, no spoilers here. Definitely keeps you coming back to find out what happens next.

I enjoyed the narrator and think she did a great job.

What an amazing listen-so many twists

This is my first by this author and narrator and wont be the last - cant wait for the next book.

I’m so excited that this is only book 1!

I really did not see that ending coming. The book was so well-written that on multiple occasions I thought I had figured out the plot, just to be fooled again! I loved it, I’m excited to see where this series goes.

This was my first time listening to this author. This murder mystery had a brillant storyline, with many twists and turns. It kept me guessing! I was surprised with the cliffhanger. Mira Williams did a fantastic job with the narration.

Filled with twists aplenty and a ton of suspense, mystery and action, “What Comes Before Dawn” will keep you on the edge of your seat, engaged and enthralled from beginning to jaw dropping end! The characters are fantastic! Some likable, some throughly detestable, but all brilliantly and beautifully defined. The plot, dark, mysterious and suspenseful yet easy to follow, really held my attention and I loved the hint of paranormal! What completely blew me away was the ending! No spoilers, but I didn’t see it coming! It was so creepy, and so good! Speaking of good, the narration was done beautifully, bringing not only the glorious characters, fabulous dialogue and fantastic scene setting to life, but also conveying the incredibly dark and foreboding feel of this story beautifully! This one was truly a fabulous listen on all counts! Five stars across the board!

What Comes Before Dawn A Mynart Mystery Thriller, my first read from author Addison Michael, was a 6-hour 38-minute/262-pageread that grabbed me and kept me reading until I finished it. “I received a free Audible copy of this book and am voluntarily leaving a review." The gifting of this book did not affect my opinion of it. I look forward to reading more from this author and in particular Dawn That Brings Death A Mynart Mystery Thriller, Book 2. Narrator Mira Williams reading of the book adds to its enjoyment. (RIP Marley January 20, 2014 - July 24, 2018).

What Comes Before Dawn: A Mynart Mystery thriller by Addison Michael is a riveting story. After her mother is murdered, Paige Deffer is in danger too. She must unravel the lies and secrets that she just discovers is her entire life. No one is who they seem to be and Paige doesn’t know who to trust. This definitely is a fully engaging thriller with many twists and shocks! The narration by Mira Williams is wonderful. She brings the characters and story to life. I received a free copy of the audiobook for my honest review.

That story was not quite what I expected….and the ending!!!
Paige is grieving the death of her mother…the mother who suffered with blackouts and memory lapses. In the midst of her grief, Paige is unraveling secrets…so many secrets…and can no longer trust anyone. Lots of twists and turns that keep you guessing. Highly recommend.
Narration was excellent!
I voluntarily accepted a complimentary copy of this book in exchange for an honest review.