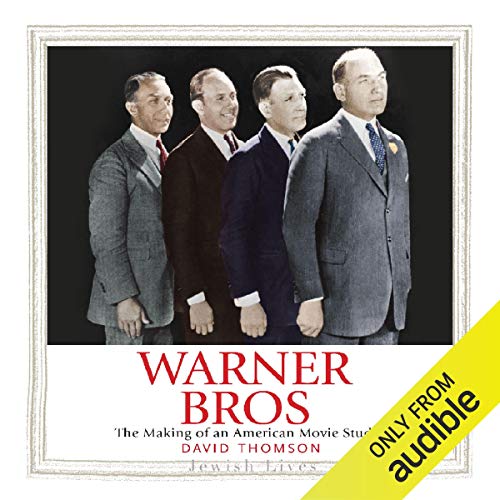 Behind the scenes at the legendary Warner Brothers film studio, where four immigrant brothers transformed themselves into the moguls and masters of American fantasy

Warner Bros charts the rise of an unpromising film studio from its shaky beginnings in the early 20th century through its ascent to the pinnacle of Hollywood influence and popularity. The Warner Brothers - Harry, Albert, Sam, and Jack - arrived in America as unschooled Jewish immigrants, yet they founded a studio that became the smartest, toughest, and most radical in all of Hollywood. David Thomson provides fascinating and original interpretations of Warner Brothers pictures from the pioneering talkie The Jazz Singer through black-and-white musicals, gangster movies, and such dramatic romances as Casablanca, East of Eden, and Bonnie and Clyde. He recounts the storied exploits of the studio's larger-than-life stars, among them Al Jolson, James Cagney, Bette Davis, Errol Flynn, Humphrey Bogart, James Dean, Doris Day, and Bugs Bunny. The Warner brothers' cultural impact was so profound, Thomson writes, that their studio became "one of the enterprises that helped us see there might be an American dream out there".

What listeners say about Warner Bros

Good but not exceptional

I enjoy the Hollywood movies of 1930s to 1950s therefore this book was of interest to me. I think it could have been longer and had more coverage of the relationships between the brothers and the actors of the period. The narration at times was irritating as the tone and volume of the readers voice would suddenly change as if he had moved closer to the microphone and spoke in a conspiratorial manner. I would still recommend to people interested in old Hollywood.

Amazing. So hugely insightful. And touching and funny. Made me want to watch all those old movies again!

Wrong voice for this story

This voice puts me to sleep , needed somebody more upbeat . Really hard to listen , thanks

David Thomson presents so many backstories of the brothers and the studio; however, when he got to the issue of W T Orr, he made an error saying that when Orr was head of the TV division, he produced Route 66 which he never did. I assume he meant 77 Sunset Strip. I do believe the TV division helped keep them
afloat in those stuggling times and actors like James Garner and Troy Donahue also kept the studio from going under completely. I just wished he emphasized more about that.