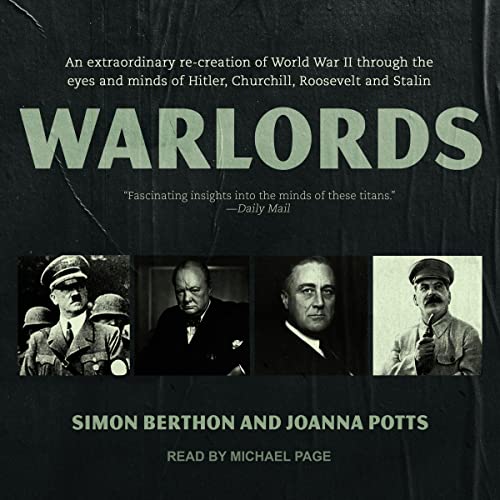 By: Joanna Potts,Simon Berthon
Narrated by: Michael Page
Try for £0.00

In a unique combination of innovative style and thorough scholarship, Warlords tells the story of World War II through the lives of the four great war leaders: Adolf Hitler, Joseph Stalin, Winston Churchill, and Franklin Roosevelt.

While their nations fought battles with weapons, the four warlords of the twentieth century fought a war of the mind. Structured along the lines of a cinematic thriller, rapidly cutting from one man to the next, the book takes us blow by blow as they try to outthink and outfight each other. These encounters are told on a day-by-day, even hour-by-hour basis, affording unparalleled insights into parallel actions.

Moving from Whitehall and Washington to the Wolf's Lair and the Kremlin, Warlords documents the psychological battles among the leaders and shows how their thoughts and actions changed history.

What listeners say about Warlords

Thoroughly enjoyed the way in which this book was written and narrated. I will look for more books by these authors.

As if you are right at their elbows

This was a very good idea: oral histories of in-the-room moments with these crucial leaders. Meanwhile, the larger picture is well-woven with the action. The personal details add much color and meaning. I got new vistas into the viewpoints of Churchill and Roosevelt in particular, as to strategy and tactics for a postwar world. Roosevelt wanted a post-colonial world (and allowed himself to be manipulated by Stalin, step by step), while Churchill tried to hang onto British prestige and reach, all the while deeply (and rightly) mistrusting Stalin. Whatever good intentions floated around, Poland was thrown under the Soviet bus. Hitler's unraveling was well depicted. Stalin's evil genius (and clever outer expressions in the presence of these grandees) is well displayed. The end takes, for me, a sad tone as exhaustion accompanies victory.