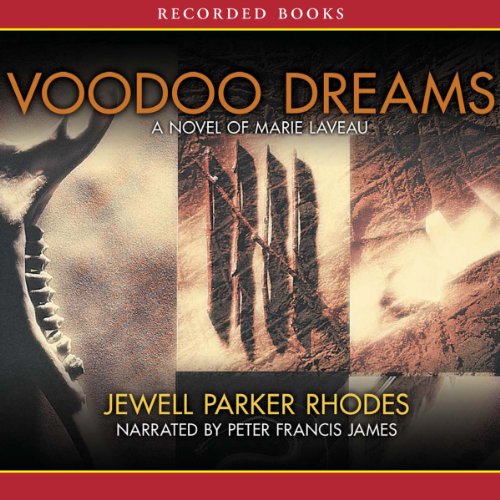 Spanning six decades of the 1800s, this mesmerizing story is a fictional biography of Marie Laveau - one of the most haunting characters in New Orleans’ history. Part of a long line of voodoo priestesses and healers, Marie tells of the mystery, passion, and violence that pattern her life. Like her grandmother, Marie sees visions from an early age. She never knew her mother, who practiced a spiritualism so potent she was murdered by those who feared her. When Marie becomes a healer, she discovers a supernatural force that can channel the power of her ancestors. But it is a ferocious force driven by both life and death.

Author Jewell Parker Rhodes has been awarded a National Endowment for the Arts and is a professor of American literature and creative writing at Arizona State University.

"All the ingredients of a bewitching read - atmosphere, adventure, mystery, and romance - as well as enough intellectual substance to give it a satisfying heft." ( Kirkus Reviews)

What listeners say about Voodoo Dreams

I really loved this book. Just after listening to it for the second time. So little is really known about Marie, but walking through the French Quarter I realized New Orleans is a place where Marie would have belonged. Whoever she was, New Orleans certainly remembers her. If you are interested in historical fiction about the south and particularly New Orleans you will really enjoy this book.

Absolutely brilliant book & fantastically narrated. I've always had a profound fascination with New Orleans & Marie Laveau and through this book I feel like I understand her & voodoo so much more. Its an awfully sad & sometimes terrifying story but at its core its a story of female empowerment in a time there was none, especially for black women.

Excellent character development I truly enjoyed the tone and pace if this story. This is a colorful legend and the author did wonderful job with the verbal illustrations that translated effortlessly into the tapestry of all the story entails. The narration was sublime as well. I highly recommend this title to anyone who enjoys historical fiction with fare, a little raunch and a whole lot of soul.

Struggled at times to get through the book. Often the story seemed to drag with unnecessary details or extreme areas of filler. The cruelty of Marie Laveau's handler and so-called lover John, at times made me question her senses or supposed voodoo powers. How or why would she have put up with him and his sidekick Natty so long? A bit of a let down, especially with her final days.

Narration would have been much more interesting with a female voice, since the main character was a woman and her grandmother!

I know it's been said before in other reviews but it's true - there is amazing character development in this novel. The story seemed 20 hours too long for a novel at times, but I truly loved the creativity and authenticity in the writing. I felt like I was observing the story live rather than visualizing the story unfold. Jewel Parker Roads out did herself in telling the story of the legend of Voodon and how it passed down through bloodlines during the slavery era.
Sometimes the story felt like it dragged a bit (IMO) but never left you asking "where did this part fit in the story"

Ancestors trying to make a better life for their children and their children's children, is the basis of the cruelty and understanding of Marie Laveau and her attempts to seek answers. Marie's so-called abusive lover John, and family friend Natty made me question Marie's strength as a woman under the age of 20. and if Marie would ever come into her own supposed voodoo powers.

I was hoping for a different ending. Not sure what - but felt disappointed and empty after 20 hours of listening to twists and corruption to have the book end as it did. Perhaps if some of the area's of the book was condensed to see how Marie lived in her golden years with her daughter?

Narrator Peter Francis James did an amazing job providing lilt, punch and charisma to each character.

At first I was skeptical about a book about Marie Laveaux that was narrated by a man but the book and the narration were phenomenal! live and vivid writing that seemed to make the story come right off the page. loved it!

What made the experience of listening to Voodoo Dreams the most enjoyable?

Just returned from a trip to new Orleans and I think to book captured the feel and history of this unique city.

I enjoyed witnessing Marie grow in her personal strength.

this was a story about a young girl who grew up with abuse molestation rape and at the end murder. this whole story was deeply saddened there was nothing in the story that felt as though there was an uplifting moment at any point in time it seemed like Marie Laveau could have committed suicide. It was not a story I expected nor did it sound like she actually achieved any level of happiness at the end.

It’s gives you an insight of what Momma Mahre’s life would have been..... with so many stories and little known facts above the great Voodoo Queen this helps you paint a picture in your head of the beginning of a legend, life in New Orleans as a slave and the promise of purpose from God and our ancestors ..... what a great tale!

A most moving and necessary read.

I loved this book from start to finish. The charcter development is great, the complexity and exploration of history and religion moved me and provided a rationale for the behavior of the characters. Beautiful read.

A bit course, but interesting.

This is one of those listens that is a great story, but not always an enjoyable read. There are many course and caustic characters and events that make it a rough story to enjoy at times. Overall, though, I enjoyed learning and experiencing this story and would love to read more on both the topic and by this author.