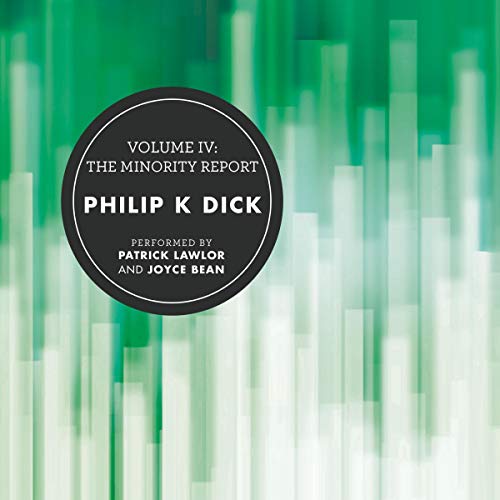 Philip K. Dick (1928-1982) was one of the seminal figures of 20th century science fiction. His many stories and novels, which include such classics as Ubik and Do Androids Dream of Electric Sheep?, reflect a deeply personal world view, exploring the fragile, multifarious nature of reality itself and examining those elements that make us - or fail to make us - fully human. He did as much as anyone to demolish the artificial barrier between genre fiction and "literature," and the best of his work has earned a permanent place in American popular culture.

The Minority Report is the fourth installment of a uniform, five-volume edition of The Collected Stories of Philip K. Dick. This generous collection contains 18 stories and novellas written between 1954 and 1963, years in which Dick produced some of his most memorable work, including such novels as Martian Time Slip and the Hugo Award-winning The Man in the High Castle. Included here are "Autofac," a post-apocalyptic tale in which humans share the devastated Earth with the machines they have created but no longer fully control; "The Mold of Yancy," a portrait of a world reduced to bland conformity by the vapid - and ubiquitous - pronouncements of a virtual demagogue; and "The Days of Perky Pat," another post-apocalypse story in which Earth's survivors find temporary solace in the Perky Pat game, a game rooted in the images and memories of a world that no longer exists. Finally, the classic title story, filmed by Steven Spielberg as Minority Report, posits a future state in which the "Precrime" bureau, aided by a trio of pre-cognitive mutants, arrests and incarcerates "criminals" for crimes they have not yet committed. Like its predecessors, this extraordinary volume is a treasure house of story, offering narrative pleasures and intellectual excitement in equal measure.

©1987 The Estate of Philip K. Dick (P)2015 Brilliance Audio, all rights reserved. Introduction © 1987 by James Tiptree, Jr. The excerpt by Philip K. Dick that appears in the beginning of this volume is from a collection of interviews with the author conducted by Paul Williams and published in Only Apparently Real, Arbor House, 1986. Used with permission.
Fantasy Anthologies & Short Stories
Show More Show Less

What listeners say about Volume IV: The Minority Report

The Minority Report was the only good story

Minority Report was really good to hear. The rest of the stories in this one aren't outstanding. I was sad that I was mostly bored with so much of this collection compared to the others.

I enjoyed this collection for many reasons. The reader’s performance is great. I recommend it.