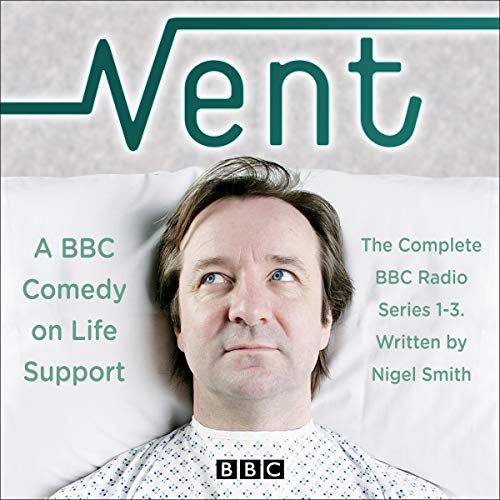 Vent: A Comedy on Life-Support

All three series of the BBC Radio 4 sitcom, plus the hour-long special 'Locked In'.

Vent charts coma patient Ben’s journey from the depths of unconsciousness, where he travels through the distinctly odd landscape of his own mind, to recovery and his attempts to readjust to the real world.

In series 1 and 2, as his mum and wife, Mary, sit round his bedside and wonder how to wake him up, Ben’s mind is busy elsewhere. In his imagination, he lives with his two-year-old daughter, Blitz (now miraculously grown up), encounters celebrities such as Sue Lawley, Elvis Presley and Tom Paulin, relives memories from his past and gets into a compromising situation with a fellow inmate at a strangely familiar Torquay hotel. Meanwhile, an imaginary sitcom written by him, about coma patients in a hospital, plays in the background.

'Locked In', first broadcast as a Friday Play in 2009, sees Ben free of his coma, but suffering from locked-in syndrome. Unable to engage with the world around him, he takes refuge once more in the safety of his unconscious – while the hospital debate whether to send him to a rehab unit or a care home.

Series 3 finds Ben taking the ambulance home to begin life in a wheelchair. But life outside hospital is a little fraught. Fortunately, he can still escape into his fantasy world, where he meets Buzz Aldrin, invents a panel game and gets some relationship advice from Lord Byron.

Based on writer Nigel Smith’s own experience of being hospitalised with a brain lesion, this moving, darkly funny sitcom stars Neil Pearson as Ben, with Fiona Allen as Mary, Josie Lawrence as Mum and Leslie Ash as Blitz. Guest stars include David Mitchell, Robert Webb and Jeremy Paxman.

What listeners say about Vent: A Comedy on Life-Support

When we fall asleep where do we all go?

Vent is a touching, funny and poignant look at the inner dialogue of a man trapped in the purgatory between physical death but brain life. Everything he has ever known or experienced becomes jumbled with his dreams, fantasies and input from the world around him. It is a wonderful series.

This is from the perspective of a man in a coma, that understands everything that is going on around him.
You’d think just lying there he wouldn’t have a care in the world, sleeping, so it seems, wrong!