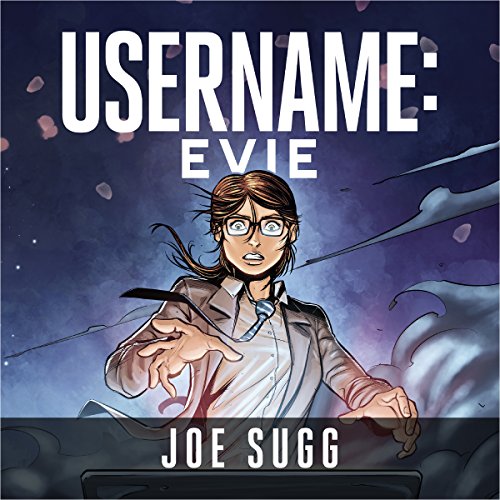 The number one best-selling graphic novel from YouTube sensation Joe Sugg, aka ThatcherJoe, brought to life in this fully dramatized audio edition.

Featuring an exclusive interview with Joe, plus a sneak preview of Username: Regenerated.

Like anyone who feels as though they just don't fit in, Evie dreams of a place of safety. When times are tough, all she wants is a chance to escape from reality and be herself. Despite his failing health, Evie's father comes close to creating such a virtual idyll.

Passing away before it's finished, he leaves her the key in the form of an app, and Evie finds herself transported to a world where the population is influenced by her personality. Everyone shines in her presence until her devious cousin, Mallory, discovers the app...and the power to cause trouble in paradise.

What listeners say about Username: Evie

I AM ON THE FLOOR!

STORYLINE HAD ME GRIPPED! VOICES WERE EXCELLENT (IT'S JOE SUGG OFC THEY WERE GOOD!)

Not only has Joe Sugg written this great book, he also voices 5 characters! I am a massive fan of both Joe and this book, and the audiobook just makes it even better. The story is so intriguing and creative, as well as reflecting real life problems. I can't even explain how excited I am for Username: Regenerated!!

Love this book! If you love Joe you will this book

lush had fun lising to it thanks you so much

Not the best performance

What aspect of the narrators’s performance would you have changed?

I would have changed how the narrators told the story. When i first listened to it sounded like I was listening to a cartoon. I really couldn't see what was happening in my mind with so much going on in the background. The story is amazing and I would love to see it on TV in the future if that ever happens because it would be amazing.