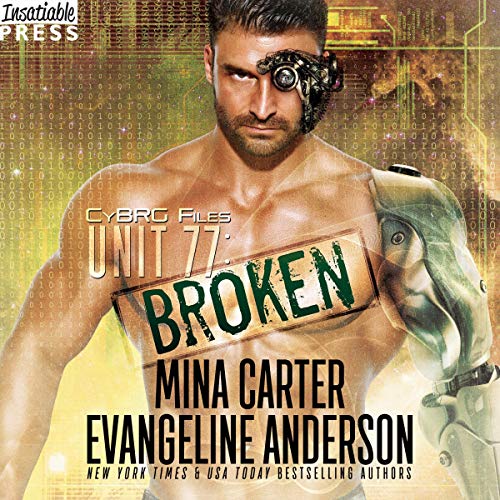 By: Mina Carter,Evangeline Anderson
Narrated by: Mackenzie Cartwright
Try for £0.00

A soldier changed into a metal monster
Still loves the doctor who made him what he is
Can Drew and Claudia overcome their past to be together?

Unit 77 is a cyborg...but he used to be so much more. Tortured by glimpses of his past, former Captain Andrew Fischer goes through his days in a metallic nightmare, feeling broken inside though he doesn't know why.

Doctor Claudia Chambers is distraught. After a land mine blew up Drew Fischer and his unit of elite Space Corps Marines, she was forced to implant the CyBRG device in all of them which turned the men into machines. But she keeps catching glimpses of humanity from the supposedly inhuman Captain...could it be that part of Drew is still in there, longing to get out? Claudia is almost afraid to hope - she loved Drew once and thought he might return the feelings. But how can a woman love a machine?

And can the machine ever love her back?

What listeners say about Unit 77: Broken

This book looked like real loser but color me surprised. I don’t care whether one or both of the writers did this book. Because I was really pleased. It sort of looked strange in the sample you get but I decided to take a chance. Good job, Ladies

This book was a bit rushed and a bit confusing in my opinion. I’m used to Evangeline’s book’s building a clear cut narrative with depth and breadth. Story line was a good one and interesting. I don’t mind a little fluff.